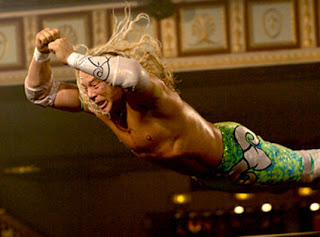 Last night at the SAG Awards Mickey Rourke announced he was coming to Houston for Wrestlemania 25. He said he was glad the wrestling community embraced and enjoyed his conversations with Vince McMahon, Roddy Piper and Ric Flair. He also said that Chris Jericho better be ready because he’s coming for him. With that said, a Rourke vs. Jericho match is now in the works. People might be skeptical but to me Rourke at a Wrestlemania is better then Mayweather at Wrestlemania. Rourke respects the business, knows somewhat what its about, and the fact he trained for the movie is in his favor. Their is nine weeks until Wrestlemania so a lot can happen in nine weeks time. I personally would love to see Rourke vs. Jericho because of the character and personality clash. I haven’t seen the Wrestler yet but It’s phenomenal from what I hear. I cannot wait to watch it. The other thing I need to point out is that R-Truth is in the movie so thats another plugging point WWE could use. I am getting excited for Wrestlemania and it’s still nine weeks away.

It was also announced that AC/DC will be performing this year at Wrestlemania as well. It was WWE who used Spoilin’ For a Fight, for the Survivor Series theme song. To me that helped put AC/DC back on the map. If you are a rock fan or AC/DC fan the CD Black Ice is definitely a must have. It’s just as great as their old stuff.

Wrestlemania 25, the silver anniversary is already shaping up to be spectacular. Add Rourke vs. Jericho to my list of predicted matches. We are on the Road to Wrestlemania so buckle up and get ready for the ride of your life.