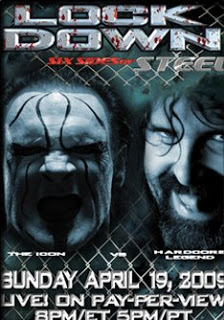 It is not too often that I post anything about TNA Wrestling because for one, WWE has more going on then they do. And two, they haven’t had any matches that appeal to me until now. The last time Cactus Jack(Mick Foley) and Sting fought was in 1992 at Beach Blast. Now seventeen years later they will encounter each other again in the six-sides of steel at Lockdown on April 19th. In seventeen years, these men have had different career paths. Foley, being hardcore, putting his body on the line and finally be rewarded for his hard work as a three time WWE Champion. Then you have Sting, who was the face of WCW and quite possibly the face of TNA has had classic matches with a lot of different guys. Lockdown is only TNA PPV I will watch because every match is inside a steel cage. I think it’s a cool concept because different things can be done in different matches inside the cage. I personally cannot wait until April 19th to see Cactus Jack vs. Sting part two. This could be the match that gets TNA over with wrestling fans once and for all. It is a dream rematch seventeen years in the making that will probably even draw WWE loyalists to watch this PPV. This match alone is worth the buying the PPV.

So now April has three Pay-Per-Views. Wrestlemania 25, TNA Lockdown, and Backlash. All within four weeks of each other. This is why April is my favorite month of the year at least from a wrestling perspective. All I got to say is it’s showtime, bang bang.