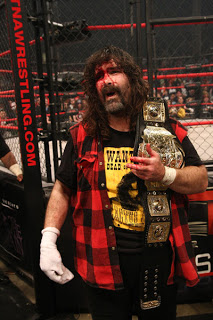 Last night was a historical night at TNA Lockdown. It saw a lot of things happen. Team 3D(the Dudleys) won the TNA Tag Team titles becoming 22 time tag team champions. That’s huge. A lot of people say that they are the greatest tag team of all time. That’s hard for me to say because I watched the Road Warrior, the Outsiders, Freebirds, Tully/Arn, and others. I would say this, they are among the greatest tag teams of all time but not the greatest. Then you had the Team Jarrett vs. Team Angle(Main Event Mafia) which was totally awesome seeing all the stars in there at the same time. The biggest shocker game at the end of the match when Bobby Lashley made his debut in TNA. Yes, that is correct former WWE United States and ECW Champion made his debut last night for TNA leaving the fans and the wrestlers in shock. And then finally, a rematch 17 years in the making, Sting vs. Foley for the TNA Heavyweight Championship. It was one of the best matches I’ve seen from TNA. Some people are saying that Lockdown was better then Wrestlemania 25. I am not sure about that statement but it was a good solid PPV, one of the better ones they have had. So here’s whats going on in TNA, Foley is champ, Lashley debut’s, Taz might be coming to TNA and Danny Bonaduce lost to Eric Young last night and got gored by Rhino. Overall a pretty interesting night in TNA last night. I’ll be interested to see what happens next.