There is not much in WWE right that’s very appealing to me except two factions. Two factions full of 2nd or 3rd generation superstars. These two factions look to be very dominant. Lets start with the first faction which is known as The Legacy. 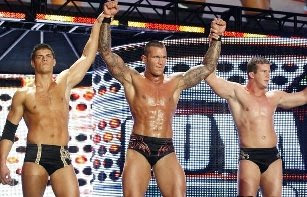 The Legacy is led by current WWE Champion Randy Orton, son of Cowboy Bob Orton Jr. His two mates are Cody Rhodes, son of the Dusty Rhodes and Ted Dibiase, son of the Million Dollar Man. This group has been dominant since late last year. Rhodes and Dibiase are two time tag team champions and nothing at the point will stop them. Orton looks to hold the WWE Championship for a very long time. Orton is taking the lessons he learned from Evolution and applying them to Legacy. Cody Rhodes and Ted Dibiase are future singles champions in this business and look for them to breakout real soon. 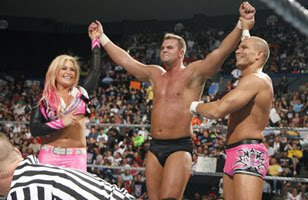 I can tell you right now, growing up as a kid I loved the Hart Foundation as a tag team. They had some of the greatest matches with the likes of Demolition, The Bulldogs, Rockers, and more. Then in 1997 the New Foundation came and had the whole family which was totally awesome. Now over 10 years later their name, their legacy, and the dynasty is back. The Hart Dynasty features David Hart Smith, son of the British Bulldog, Natalya the daughter of Jim Neidhart and Tyson Kidd, who met the Harts when he was just 10 years old. Technically he is in the family because he is dating Natalya. These three dawn the old pink and black and their finisher is Hart Attack. I look for these three to do some great things in the future. When the time comes the Hart Dynasty will be unleashed on Monday Nights or Friday Night. When it does beware. Like I said, these two factions are the only thing the keeps me interested in the WWE. Continue to show more of these two factions and you’ll keep me happy. Maybe someday they can call themselves The Best there is, the best there was and the best that their ever will be.