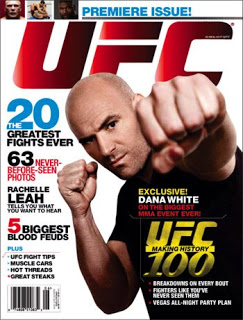 So I was in a store the other day and I came across the debut issue of UFC Magazine. I must say I am very impressed with how it was done. The editing was fantastic. I liked all the feature stories on some of the fighters and some of behind the scenes things they showed. They had a lot of pictures of the backstage during big events. It was fitting that Dana White was on the cover. He made all of it possible. I know if I had an organization I would want him working for me. The UFC is doing a lot of great things right now. UFC Undisputed for XBox 360 and PS3 is a phenomenal game that tops a lot of other sports and fighting games. I also saw UFC sports cards awhile back. UFC is hitting the mainstream and people are starting to gravitate towards what they are doing. This magazine is a prime example of how popular the UFC is becoming. Great job to all the writers, photographers, and editors who are apart of the magazine. I am actually thinking about becoming a subscriber.