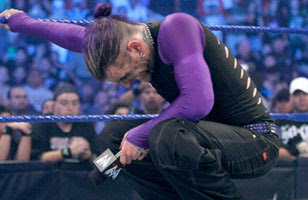 Last night on Smackdown Jeff Hardy said his farewell to the WWE as he lost the loser leaves town World Heavyweight Title match in a steel cage match against CM Punk. I was really happy to see Jeff have a proper send off. Over the last week he has had two incredible matches with a guy that he made a credible main eventer and made him a credible heel. So yes I am agree with what Matt Hardy said. He stated Jeff made CM Punk a credible main eventer and heel. Matt also called out some of the internet wrestling community who criticized Jeff Hardy by saying that they should respect Jeff Hardy because of what he has done for their friend. I agree with that totally. It wouldn’t surprise me if these certain internet wrestling fans are from Chicago or even wrestlers from Chicago. Chicago wrestlers are known to be assholes and know it all’s. At least thats what I have heard from people.

Anyways enough but the war of words. Jeff’s three run in the WWE was awesome. As I mentioned before he did a lot of great things in his second run with the WWE. He had some great matches with Umaga, Mr. Kennedy, Triple H, Edge and his brother Matt. Do I think Jeff will be back? Most certainly yes. His career is not over by a long shot. Jeff Hardy will be in the WWE Hall of Fame someday and will always be remembered for his rock star like entrance and his craziness in the ring.

All I got to say is Jeff, I look forward to seeing you on TV again.