Since the spring of 2005 the one thing has disgusted me the most about the WWE is the WWE Championship and the way it looks. When John Cena won the WWE Championship at Wrestlemania 21 he got rid of a traditional WWE Championship belt and turned into a glorified piece of bling that people wear around there waist. It is being reported that a new belt is being made to replace the spinner belt and will debut soon. When it comes to wrestling I am about tradition and being old school. I will also admit when it comes the belts I mark out for almost all of them including the spinner belt. The spinner belt is cool to have as a item around the house or to bring out and show your friends but it’s not right for a WWE Championship. Look back on some of the older belts. 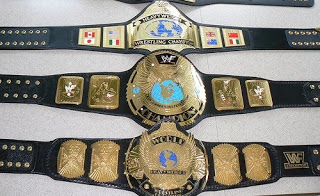 These belts had style, class, dignity, and sense of respect that made the championship worth fighting for. Look at some of the past WWE Champions like Hogan, Savage, Hart, Flair, Bruno Sammartino, Bob Backlund, and others. Do you think they would have looked good with the spinner belt on them? No they wouldn’t. In fact in doesn’t look good anyone who has held it including Randy Orton, Jeff Hardy, Edge, Triple H, and Rob Van Dam. I am hoping whatever this new belt looks like it represents the past and the present. I personally would like to see the one that was used from 1998-2002 to return. I hope this new belt debuts soon it likes something people would fight for. Lastly, if you were going to desecrate a belt, why not do it to the World Heavyweight Championship? After all it use to be the WCW Championship belt and WCW is dead so it’s not like anyone cares about it. So finally after four years of me complaining about this spinner belt, I will finally get my wish and there will be new championship belt. I for one will be rejoicing that a new belt has arrived. I will definitely be posting my thoughts on this new belt when it comes out and hopefully it will be better then what we have seen the last four years. Stay tuned for more.