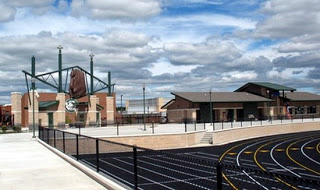 Well because I am from the city of Wayland Michigan I only find it fitting that I should write about the new football stadium up at the high school. I attended the opening last night and I must say I was impressed. The stadium featured a new entrance, concessions, track and more space for people to gather at when they are not watching the game. It use to be crowded at the stadium but not anymore. I was really excited to be at the grand opening of the new stadium.

And for those who are wondering who Ron Stehouwer is, he grew up in Hopkins Michigan and attended Colorado State University. He then went on to play in the NFL with the Pittsburgh Steelers for five years. Little did I know, Ron and I share the same birthday, February 4. He’s one of the most successful people to ever come out of the Wayland area and deserves to have his name in that stadium. Congratulations to Ron, the Wayland Union School District for making it all possible. It is definitely more enjoyable to be at a Wayland football game now.