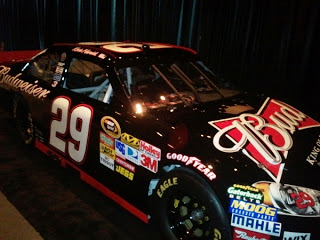 A few days ago I came upon the new look that Kevin Harvick would be racing under this year. Usually paint schemes aren’t that big of a deal but considering who Harvick replaced 10 years ago, it is indeed a big deal.

It will be 10 years this Daytona 500 since the legendary Dale Earnhardt died on the last lap helping two of his cars that he owned finish 1 and 2 in the race. It was suppose to be a joyous occasion for Earnhardt Inc. but it turned into grief and sadness for everyone involved in NASCAR.  Even though the sport lost it’s greatest driver, people realize that life must go on and one of those people was Richard Childress who owned the number 3 Goodwrench Chevrolet. He put Kevin Harvick in Dale’s spot but not under the number 3, but the number 29. There was no longer a black number 3. Instead a white number 29 car that eventually became Pennzoil/Shell red and yellow.

Ten years later Kevin Harvick has a new sponsor and it is Budweiser. However the car is not red, it is black with red and white outlining. It is a lot like Dale Earnhardt’s old paint scheme when Dale drove the number 3 Goodwrench. I think it takes a lot of courage and confidence to do what Kevin Harvick and Richard Childress are doing. I personally think it gives Harvick an edge and a sense of confidence.

The number 3 may be retired, but the spirit behind the number will never die. This could be the turning point for Kevin Harvick and company. The Daytona 500 is next Sunday so stay tuned for more coverage.