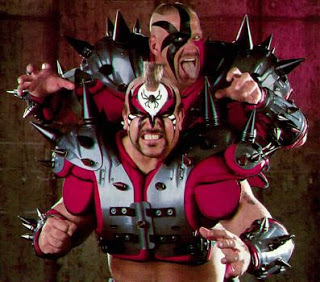 Before I begin let me just say this. It’s about time because if anyone or any tag team ever deserved to be in the WWE Hall of Fame it’s these two guys. Hawk and Animal made their debut in 1983. They hit the AWA in 1984 and moved to the NWA in 1986. Along the way the fueded with The Freebirds, Four Horsemen, The Koloffs and The Midnight Express. The Road Warriors left in 1990 and finally made it to where thet always wanted be.

In 1990 the made their debut in WWE wrestling tag teams like Demolition, Hart Foundation, The Rockers, Natural Disasters, and Money Inc. They won the WWE Tag Team titles at Summerslam 1991 against the Nasty Boys. It was their crowning moment winning those titles in Madison Square Garden. In 1992, Hawk suffered an injury and the Road Warriors departed WWE.

They returned to WCW in 1996 and feueded with Harlem Heat and the Steiner Brothers. They stayed in WCW for about 6 months and had a contract dispute with management which ended them in leaving. In 1997 the returned to WWE in which the feuded with the Headbangers, the new Hart Foundation, The Godwinns, and the New Age Outlaws. Then finally in 1999 they were let go from WWE.

In 2003, Hawk passed away and the legendary team was no more. Hawk had overcome personal demons and became a born again Christian. Animal continued the Road Warrior legacy and tradition but it was never quite the same. The Road Warriors won titles in every major promotion.

This is well deserved and it’s totally great to see the greatest tag team of all time to finally have their rightful place in the Hall of Fame. All I can say is What A Rush!