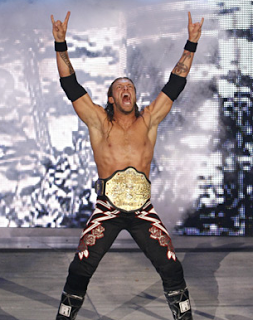 This past Monday Night on Raw, I didn’t see Edge the WWE Superstar in the ring. I saw Adam Copeland, a very proud man who loves pro wrestling that had to give his love up way to soon. Edge announced to the world he had to retire due to a relapse from his neck injuries from eight years ago. Edge’s WWE career started off in 1998 as a mysterious guy who came in from the crowd who didn’t show much personality and didn’t talk.

In 1999, he captured his first singles title by defeating Jeff Jarrett for the Intercontinental Championship. Later on that year he and his best friend Christian really began to carve a legacy in tag team wrestling. They feuded with the Hardys and Dudley Boys. They competed in Ladder matches that turned into TLC Matches and reinvented tag team wrestling and ladder matches as we know it. In 2001, Edge won the King of the Ring and it proved he could hang with the best of them.

He won the tag team championships with with Christian, Chris Benoit, Rey Mysterio, Hulk Hogan, Randy Orton and Chris Jericho. He also won the WCW United States Championship, Money in the Bank and the 2010 Royal Rumble.

In January 2006 he finally won the WWE Championship by defeating John Cena. He feuded with John Cena, Rob Van Dam and others. Also in 2006 he teamed with Randy Orton to feud with Degeneration X. After the feud with DX he went to Smackdown where for the majority of four years he feuded with Batista, The Undertaker, Kane, Jeff Hardy, Dolph Ziggler and Alberto Del Rio.

Over the last several months he’s reunited with Christian and they have been teaming on and off. At Wrestlemania he retained his World Heavyweight title and retired as champion. There is no better way to go out then by being the best in the world. My favorite Edge moments were in 2005 when he feuded with Matt Hardy over the love triangle that took place in real life between the two of them and Lita. It was controversial, edgy, and they had some really good extreme matches that made their careers better.

Edge definitely went from nothing to something and he should be very proud of what he did in his career. One thing needs to be said though and that is never say never. Shawn Michaels took four years off an came back and look how great he was when he came back. However if this is Edge’s farewell then my I tip my hat to you and say congratulations. I’ll never forget the spear off of the ladder to Jeff Hardy or the spear to Mick Foley through a flaming table. Thank you Adam Copeland for being Edge.