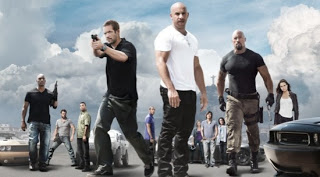 Finally The Rock has comeback to the big screen. Last night I watched the newest Fast and the Furious called Fast Five. It was a good pick up from where the last movie started off. It started off with Mia, Brian and Dominic all in Rio with Dom’s long lost buddy Vince. When they decided they want to pull off an impossible job they call in all their connections from the past. Anyone who was anyone in the Fast and the Furious movies was in this movie then you added The Rock to this movie and it was simply electrifying.

The action in this movie was unreal. There was a lot of great driving scenes and more importantly a great fight scene between The Rock and Vin Diesel. There was a moment in the film where Dom and Hobbs had a stare down in the streets and it feels like The Rock and Hogan moment at Wrestlemania 18. It was two of the biggest stars in Hollywood in their own right facing off in a great movie. This movie was packed with stars including Paul Walker, Tyrese, Ludacris, and Jordana Brewster.

The story was kind of interesting. It had some twists and turns that I didn’t expect to happen. The final thing I am going to say is that watch the movie all the way through until the end credits are over. I will say that I was completely shocked by what I saw. I would give this movie 4.5 stars out of 5. It had everything from action, comedy, and drama. I have seen all of the Fast and Furious films and this one by far was my favorite of them all. Stay tuned because it was confirmed that there will be a sixth movie coming out.