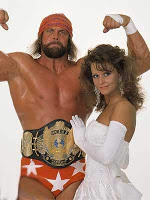 This morning the wrestling world learned that one of it’s greatest in ring performers of all time has passed away. Randy Poffo made his pro wrestling debut in November 1973 and was trained by his legendary father Angelo Poffo. He made his WWE debut in 1985 and quickly got noticed. His early fueds with Tito Santana, Bruno Sammartino and George “The Animal” Steele are what really put him on the map as being a legit star. He had a 14 month reign is the Intercontinental Champion which ended at Wrestlemania 3.

Most people consider Wrestlemania 3 and his match with Ricky Steamboat to be the highlight of his career. Even after his lost to Steamboat he went on to do some great things. In late 1987 he turned face and formed the Mega Powers with Hulk Hogan. Savage’s crowning moment happened at Wrestlemania 4 when he won the WWE Championship in a 14 man tournament. However one year later he turned heel and lost the title to Hogan. During his heel run he had feuds with Hogan, Dusty Rhodes and The Ultimate Warrior.

In 1991 Savage turned face once again feuding with Jake the Snake Roberts, Ric Flair and his last real feud in WWE with Crush. Savage departed WWE in 1994 to head to WCW. He wrestled for five years and then in 1999 disappeared from wrestling until he made two brief appearances for NWA-TNA (now known as Impact Wrestling). Randy Savage provided us with many moments and many accomplishments including:

Randy Savage will always be remembered for his charisma, Slim Jim commercials and his colorful in ring gear. My thoughts, prayers and condolences go out to his wife Lynn, Lanny Poffo (also known as The Genius). We will never forget you Macho. Rest in Peace!