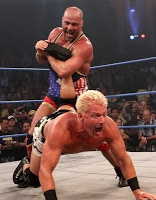 It was nearly two years ago when a mysterious caller had called in to the Bubba the Love Sponge show and said that Karen Angle was living with Jeff Jarrett. A lot of spectulated and no one knew it was true until Dixie Carter suspended Jeff Jarrett indefinitely. Jeff Jarett eventually came back but it wasn’t until eight months ago that the real life issues between Jarrett and Angle started playing out on TV. Jarrett turned heal and aligned himself with Hogan and Immortal while Angle fought for his respect. During this whole rivalry the kids were dragged on TV and the now Karen Jarrett came back to TNA on TV. This feud had so many twists and turns to it but it was one of the best feuds pro wrestling has seen in a long time.

Jeff and Karen got married on August 21, 2010 and little did they know, their families would be thrown on TV. The feud finally concluded this past Thursday night in a Parking Lot Brawl. The stipulation is if Jarrett lost he would have to leave Impact Wrestling and go to Mexico. Kurt Angle made Jarrett quit and that’s how Impact Wrestling went off the air.

For storyline purposes it worked out Jarrett because his now the AAA World Heavyweight Championship which he won last night at AAA TripleMania 19. Here are the full results of that show:

I have a feeling Jarrett will be back in TNA but for now he’s staying down in Mexico to better the relationship between TNA and AAA. It is a partnership that could finally get TNA Impact Wrestling where they need to be to make some real big noise. I’ve often said that the best storylines in wrestling have come from real life feuds. Feuds that I am talking about include Kevin Sullivan’s feuds with Brian Pillman and Chris Benoit. Look at the feud between Matt Hardy and Edge over Lita. Both their careers really took off after that, especially Edge.

As far as Kurt Angle goes, he announced he is trying out for the 2012 USA Olympic Wrestling Team. Whether or not Jarrett and Angle cross paths again remains to be seen. One thing for sure both are going on to bigger and better things. They both deserve some closure and their families deserve privacy. What’s done is done and I will say the feud was great while it lasted. It was real, it was damn real and I enjoyed every minute of it.