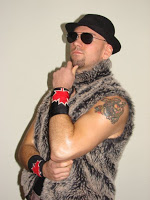 In 2007, a young man from Harrison, Michigan decided to pursue his dreams and take his Canadian Heritage with him along the way. John Campbell has made quite an impact in the last four years. He has wrestled in Wisconsin, Illinois, Indiana and Ohio. He was won numerous titles in the Midwest and he is always trying to better himself along the way. I had a chance to talk with John Campbell about his thoughts and feelings on where he has been and where he is going

What made you wants to be in pro wrestling?
When I was younger I was really overweight. I was bullied and picked on a lot in elementary school. My cousin introduced wrestling and after that I started living vicariously through the wrestlers on TV. As a kid it was my escape and I always looked at wrestling as real life superheroes. No matter how bad things got, I turned on the TV, and I saw those guys doing what I wish I could do at the time.

What are your first thoughts and memories about being in pro wrestling?
Setting up ring, and then getting to be able to bump around in the ring afterwards. I finally thought, I am here and I am living my dream.

What has your training experience been like with Eric Freedom?
It’s been great, and he’s been to the dances more then once. He has been in the business for over 20 years and has worked for all the major companies so I can really pick his brain. He has a real knack for knowing what people have to work on and knowing what people have to do to make it. He’s really great a teaching the psychology of a match.

Who has all been apart of the Canadian Hit Squad and how have they contributed?
Myself, Cody Kelley, Nik VanCore, Jean Paul Lavek, and Rex Hart. Cody was my first full time tag team partner and with Jean Paul and Nik VanCore were all friends outside of wrestling before we all broke in. We meshed very well because we had that friendship. Rex Hart is someone I became very good friends with after I got into business and he brought 20 years of experience. He can legitimately bench 800 pounds so he is a powerhouse.

What is your most memorable match?
The night that myself, Cody Kelley, and Jean Paul, and Rex Hart teamed to take on Pyschodelic Inc and Road Dogg Jesse James. I remember looking around with some of my best friends in and out of the business and remembering how cool it was that I was working with someone that I grew up watching. It was 10 minutes from where I live.

What is the best wrestling show you have been on thus far?
I honestly can’t answer that because I don’t hold one show over another. They are all big shows to me because people pay there hard earned money to be a ticket.

What was it like meeting Rowdy Roddy Piper?
It was awesome; he was legitimately my hero growing up. He actually pulled me aside and asked me questions about my career. I thought that was really because here is my hero and he wants to know how and what I am doing. Ever since I’ve gotten in the business I try not to mark out but in my mind I kept saying, “Holy Shit this is Rowdy Roddy Piper.” He’s really cool and you can tell he’s a genuine person

If you could face one legend who would it be and why?
It’s a toss up between Hogan, Flair, Piper and Bret Hart. They were my heroes growing up as a kid.

Now I am going to give you few names and I want you to describe them in a sentence.
Cody Kelley: My best friend. If things would have been different he totally would have made it
Nik VanCore: Back on the scene. I think people are going to be very impressed this time around. Also another best friend
Rex Hart: Great guy. I am glad he’s on my side
Eric Freedom: My mentor in the business. I am proud to call him one of my best friends
Bret Hart: Great inspiration. Somebody I really looked up to as a kid and somebody I still do.

Do you have any road stories you would like to share?
One time I did a show down in Indiana. On the way down I blew a tire and I put the spare on to make it to the show. During my match I broke my hand, and then on the way home I blew the spare tire. Luckily someone we were riding with drove from Grand Rapids to South Bend to come get us. I end up staying the night in Grand Rapids. The next day I had my friend Tim drive to Grand Rapids to take me back down to South Bend so I can get a tire for my car and go home. However, it was Sunday and we could not find an open tire place to save our lives. All the money we had was for gas and to buy a new tire so we bummed around South Bend for a day. I finally ended up going to the emergency room and we ended up sleeping at an all night Wal-Mart in the Home and Garden Section. Finally the next day we were able to get a tire and leave. I hate Indiana!

If you could choose were you could wrestle between WWE, TNA, and ROH which would one would you choose and why?
I would like to wrestle for all three someday because its three different styles and three different rosters of guys I could learn from.

Is there anyone on the Michigan Indy Scene that you haven’t wrestled yet that you would like to?
Three guys in particular. First and foremost James Dillinger because he’s one of my best friends outside the business. The next guy is Gideon Malice because he is the real deal. Also Stuntman Mike because it would be an easy win.

What can we expect from “Gentleman” John Campbell in the future?
I am going to keep working hard and busting my ass to entertain the people and put on a show…a good show.

The future is bright for “Gentleman” John Campbell. With his positive attitude, his positive work ethic and positive influences, John is going to very far not just in wrestling but in life as well.