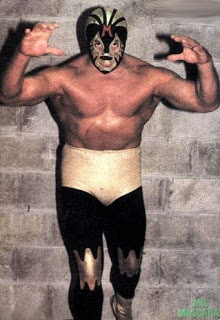 It was announced last night in Mexico City that the legendary Mil Mascaras will be the first inductee in the WWE Hall of Fame next year in Miami.  Mascaras made his debut on July 16, 1965 and he never looked backed. He is one of the greatest masked lucha-libre wrestlers to ever grace the ring.

He paved the way for guys like Rey Mysterio, Psicosis, La Parka, Juvi, and Sin Cara. He also has nephews in the wrestling world who are is nephews are Alberto Del Rio, formally known as Dos Caras, Jr, Sicodélico, Jr, and Hijo Del Sicodelico. Mascaras has blood to carry on the tradition of what he started years ago in Mexico. His name stands for a thousand masks. He wore many different masks during his time in wrestling. Mascaras also has had 17 championship reigns in his historical career.

Mil Mascaras is a great addition to the WWE Hall of Fame and it is well deserved. Viva La Rasa to Mil Mascaras.