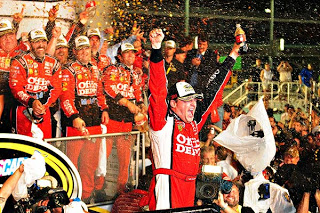 When people look back on this season 10 years from now they will always remember how competitive the 2011 NASCAR Sprint Cup season was. No one ran away with the championship this year and at the last race it came down to two men separated by three points. Carl Edwards led by three points and had the pole whereas Tony Stewart started 15th and had to fight his way to the lead. Stewart and his crew were warriors in the last race of the year. They made multiple pit stops early on to fix a hole in the grill. At one point Stewart was all the way back in 40th position.

This is Stewart’s 3rd Cup Championship but his first as a car owner making him the second driver/owner to win a championship. The first man to do it was the late Alan Kuluwicki in 1992 driving the #7 Hooters car. Stewart never one a race before the chase but won four during the chase which gave him the momentum headed into Miami. He and Carl Edwards battled it out the entire race amongst each other and with other drivers. In the end, Stewart won the race and championship. At the end of the race both men had the same amount of points, but Stewart won the tiebreaker because he won the most races in the chase.

Here are the standings for the top 12 who were in the chase and how it looks now the year is over.

I think the NASCAR officials knew what they were doing when they redesigned the points system before the beginning of the year. It put an emphasis on winning and finishing good consistently. I believe this year was the start a new and great era in NASCAR. Now we wait two months and it’s right back to the greatest race of the year, the Daytona 500.
NASCAR
Please Share This