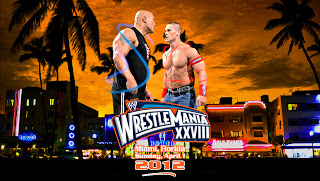 This time of year a lot of rumors go around about who is wrestling who at Wrestlemania and what matches are going to take place. We already know The Rock will be taking on John Cena in Miami. I honestly think a lot of people don’t care about Rock vs.Cena and so you will have to build a solid card behind it. It’s so easy to predict the winner in the match it’s ridiculous. People want to see wrestling again, not a match where each wrestler does five moves and calls it a night. This year’s Wrestlemania needs to be big, and not because of Cena and The Rock. It needs to be big to show the world the best matches and talent they can possibly give.  If I writing the card for Wrestlemania here is what it would look like:

Now here are some of my reasons. First and foremost, no one cares about the Diva’s or long segments and promos at Wrestlemania. People want to see wrestling which is what last years Wrestlemania lacked sorely. A lot of people want to see Triple H vs. Undertaker again but I don’t. If this truly is his last Wrestlemania he needs the face the character and person whose had the most involvement with him during his career which is Kane. I have also heard Mick Foley would like to go against the Undertaker which wouldn’t be all bad if it were a Hell in a Cell.

As far as Triple H goes at Wrestlemania, I strongly believe he should wrestle Alberto Del Rio to really see if Del Rio can hang in a main event match with the best in business. ADR has had a lot of chances this year but something isn’t clicking and I think a feud with The Game would help his career in so many ways.

The next thing I would do is bring back and have a star studded Money in the Bank Ladder match and add the stipulation that it has to be cashed in before the Money in the Bank PPV which would definitely shake somethings up. Speaking of stars, Shaq is in negotiations with WWE to wrestle the Big Show. I think this would be good for drawing purposes but for the last year I’ve heard Kevin Nash vs. Big Show which would be awesome because they have actually had some great matches in WCW in the past.

Finally the two big championship matches. The Miz and John Cena was a horrible main event last year and WWE needs to make up for it with two pure wrestling matches. I’ve heard Jericho is coming back to face Punk which would be awesome because both are great on the mic, and have great charisma. Wade Barrett is long overdue for the World Heavyweight title and I think he and Daniel Bryan could steal the show.

The WWE needs some high flying action in Miami because that’s what the latino’s like which is why Rey Mysterio vs. Hunico would be great. Hunico was the 2nd Sin Cara and is a good high flyer. The triple threat tag match would also give the crowd high flying action because all three teams can fly. Not to mention the WWE Tag titles are usually overlooked and hardly defended at Wrestlemania anymore.

The oddball match people are wondering about it Cody Rhodes vs. Goldust and the reason I suggest it is because Goldust(Dustin Rhodes) wants to wrestle at Wrestlemania one more time and have his last match against his brother. They have never went one on one during their stints together in WWE. It would be special and for kicks throw Dusty in as the special guest referee.

For all you WWE fans out there, this is what my card would look like and I think it would be great if it actually happen. If you were planning Wrestlemania 28 what would you do? Post your comments below.