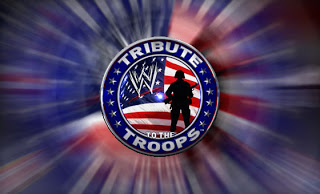 Last night was the annual Tribute to the Troops show put on by WWE. I’ve always respected the WWE for putting on this show. It’s been going on since 2003 and every year its gotten better. This year it featured performances by Nickelback, Mary J, Blige and George Wallace. Their were also video messages from celebrities and other dignitaries. The matches were solid and good quality. I like they kept all the current feuds running and didn’t shy away from the storylines. Here are the results from last nights show:

-Kelly Kelly, Eve, Alicia Fox and Maria Menounos def. Divas Champion Beth Phoenix, Natalya and The Bella Twins
-Zack Ryder def. Jack Swagger
-Randy Orton vs. Wade Barrett ended in a Double Count-out
It was great to Sgt. Slaughter out with Zack Ryder. Sarge is an American Icon and still is loved by the Armed Forces and many wrestling fans alike. The whole show was put together well and WWE should be proud of their efforts. For all those who knock on WWE, they do great things like this to silence their critics. All I have to say is God Bless our troops, Merry Christmas and come home safely. USA! USA! USA!
WWE
Please Share This