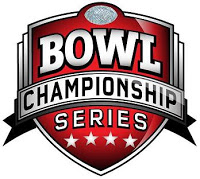 Every year after the National Championship has been decided, the ongoing debate begins about who is really the best and how it should really be decided. In previous writings I have suggested that it should go to a playoff system. Now I’ve come up with the perfect solution for everyone. There should be an 8 team playoff where 1 team from each conference is represented. The Conferences should include the Big 10, Big 12, Big East, Pac-12, SEC, ACC, Mountain West, and IA Independents.

Now you’re probably asking how should it be determined who gets in and who doesn’t. It’s quite simple actually. At the end of the regular College Football season, take the two best teams in each conference and put them in the title conference game. Whoever wins that game is in the playoffs. Now people might ask about what to do with the other big bowl games. That too is also a very simple solution. The Rose Bowl would be the runner up in the Big 10 vs. the runner up in the Pac-12. The Fiesta Bowl, Orange Bowl and Sugar Bowl would be a random drawing of the teams that lost in their conference title games.

College Sports is no different from pro sports in the fact that it’s about making money and drawing ratings. No one wants to see two SEC teams, or two teams from the same conference play for a National Championship. My solution offers a chance to make more money and draw more ratings. If each conference is represented with something to play for, fans of those conferences would be more likely to watch what goes down. For example, if they would have had an 8 team playoff this year, this is who would have been in:

Oklahoma St., Virginia Tech, Cincinnati, Wisconsin, Brigham Young, TCU, Oregon, and LSU. Can you honestly tell me that potential to see these teams play each other would not excite you? I would have loved to have seen some different matchups that I am not accustomed to seeing.

I think in the end, no matter what the format or solution, there needs to be a National Championship Tournament featuring the top 8 teams in the country. I believe my solution is fair, and it keeps everyone involved and ends almost any debate that a school would have for why they should be in a National Championship Game. Bring on the playoffs and bring us excitement. In the end, everyone will win.