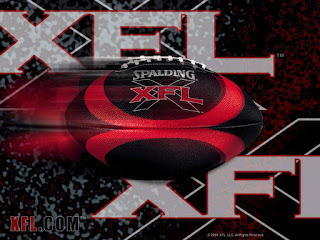 As I watched with a lot of disappointment during the Super Bowl this year, I kept thinking about the one and only season of the XFL in 2001. I remember how crazy, wild and hard hitting it was. It was very intense and unpredictable.

Looking back at the XFL, it had a lot of great concepts like the camera angles, the Halo Rule, Overtime rules and more. If Vince McMahon and NBC would have left WWE personalities out of the XFL I think it would have been successful.

The reason I bring this up is I wish the NFL would get back to the hard hitting and intense games I use to watch as a kid. These so called “dirty” players like James Harrison and Ndamukong Suh would have fit perfectly in the XFL culture. Quarterbacks got hit and got hit hard in the XFL. I have always said that if Harrison and Suh played 30 years ago they would have been praised as toughest and most aggressive players in the league who play the hardest.

A lot of people think the XFL was a joke but not all of it was. Some players went on to be a success. If you don’t believe me here is a list of XFL players who went on to play in a Super Bowl:

I hope someday that we will get to see the hard hitting football we once saw in the early days of the NFL and in the one season of the XFL. Who knows maybe Vince McMahon will bring the XFL back someday….as they always say, “Never say never!”
NFLWWEXFL
Please Share This