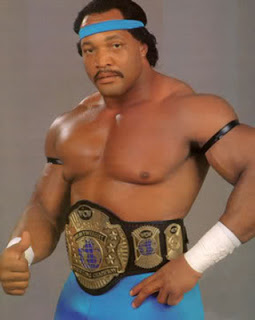 DAMN! It has been announced that Ron Simmons will be inducted into WWE Hall of Fame. His pro wrestling career started in 1986 but before that he played football at Florida State University and played one year for the Cleveland Browns. He is in the College Football Hall of Fame as part of the 2008 class. He was also a teammate of fellow pro wrestler Lex Luger in the USFL.

He began his wrestling career as part of the team called Doom, with Butch Reed and their manager Teddy Long. They defeated the Steiner Brothers for the NWA Tag Titles and when it became WCW, they defeated Arn Anderson and Barry Windham. They held the titles for nine months and then Simmons  was pushed as a singles wrestler. His first feuds were with Lex Luger and Cactus Jack.

On August 2nd 1992, Ron Simmons captured the WCW World Heavyweight title by defeating Vader. That feat made him the first ever African American to win a world title between WCW and WWE. He held the title for five months feuding with Cactus Jack, Rick Rude, The Barbarian and Dr. Death Steve Williams. After he dropped the title he feuded with Paul Orndorff and Dustin Rhodes. After his departure from WCW he wrestled in ECW for a year before heading to WWE.

He arrived in WWE as Faarooq in 1996 and before to long he became the leader of the Nation of Domination feuding with Ahmed Johnson, and Legion of Doom. Once he was ousted by The Rock as the leader of the Nation he began to team with Bradshaw. They eventually became the APA (Acolyte Protection Agency). They were two rough and rugged guys who liked to drink beer, play cards and fight. They captured the tag team titles on three separate occasions. They teamed from 1998 to 2004 and took on every tag team that was hot in that time from. Once they eventually split up in 2004 Ron Simmons was no longer an active wrestler.

In 2006, Ron Simmons began to be apart of certain segments with comedy in the WWE and all he would say is one word. That one word was “DAMN!” He is an intricate part of WWE and will be remembered for so many things. He paved the way for African American pro wrestlers to be successful in pro wrestling. All I got to say about Ron Simmons being in the Hall of Fame is DAMN! It’s long overdue.