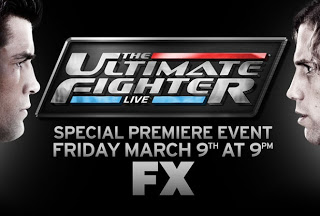 Last night the premiere of The Ultimate Fighter Live came on and the world of MMA to a whole new level. This was one of the best nights of fighting that I can remember. They had 16 fights in over a two and half hour span. Some of them went to decision, and some of them didn’t but at the end of the day 16 fighters advanced to the house.

The show is hosted by Jon Anik. Last night during qualifying fights, Cruz, Faber and Dana White were all mic’d up which made the show. It gave us insight to what they were think and which fighters they like.  I think it’s going to fun to watch the coaches pick their fighters live. The season will be 13 weeks long and the conclusion of the Ultimate Fighter will be in June at at The Palms Casino Resort in Las Vegas. The coaches are scheduled July 7 at UFC 148 for the UFC Bantamweight Championship.

This year there will be fan interaction as well. Fans get to vote on certain categories so if you’re a fighter it’s going to give you more incentive to have a good fight. Here is what I mean by fan vote.

There are some other bonuses as  well which include the following:

-Any fight ending by submission, knock out, or referee stoppage earns the winner $5,000.

-The winner of The Ultimate Fighter 15 and his coach will also win a Harley Davidson motorcycle.
Here are the results are from last nights premiere show.

Like I said a lot of these fights went the distance and a lot of these 32 gave everything that they ever had. The next 13 weeks with Dominick Cruz and Urijah Faber are going to be very interesting. They are both competitive and will look to win, even if it’s not in the octagon or for a title.
Stay tuned for more over the next thirteen week because the Ultimate Fighter is here and it is now.
UFC
Please Share This