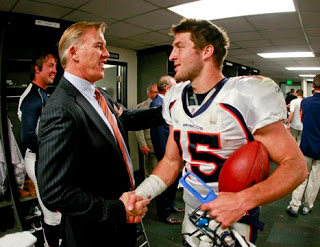 This past weekend it was reported that Peyton Manning met with John Elway and the Denver Broncos. The rumors floating around now are that the Broncos are pursuing Manning and if they sign him they will trade away Tim Tebow. I have always respected Elway the football player and Quarterback who has a lot of legendary moments. However John Elway the business man is very shady and unsure of himself.

This past football season, all we heard about was one week Elway loves Tebow, and then the next week Elway wants to get rid of Tebow. This back and forth didn’t help matters when the media covered Tebow. It added a lot fuel to the fire. In all fairness Tim Tebow did bring the Broncos to the playoffs and won a first round playoff game against the Pittsburgh Steelers. I have always said that just because you’re successful on the field doesn’t mean you will be in the front office. Matt Millen running the Detroit Lions was a prime example of that.

My message to Elway is this. If you are going to keep Tebow then keep him and let him continue to improve his game so he can keep bringing your team to the playoffs. If you’re going to get rid of him like you’ve suggested already then please be fair to the Denver Bronco fans and Tim Tebow and let him go. I am sure the fans of the Denver Broncos don’t want to hear you go back and forth every week on if he is the future or not.

So please let the 2012 NFL be less filled with Elway and Tebow talk and more about what’s going on the field. Elway be smart, and make a decision on this and stick by it. Nobody wants to keep your approval or disapproval of one person. It’s a team game and a team effort so either put up or shut up.