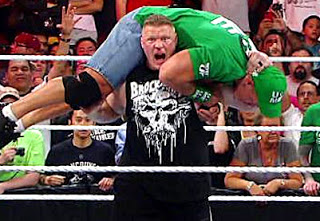 If you don’t follow pro wrestling on the internet then it came to you as a shock that Brock Lesnar returned last night on  Monday Night Raw. Even for those who do read the dirtsheets, rumors and reports it was still a spine chilling moment. Brock Lesnar has returned to the WWE after 8 years. His last match many consider to be the worst Wrestlemania match in the history of the event.

So where has Brock Lesnar been? Brock tried out for the NFL’s Minnesota Vikings. His athletic ability was remarkable but he didn’t have a football mindset. Then he wrestled for quite a long time in Japan where he had some memorable matches.The one I remember is his NJPW Heavyweight Title Match against Kurt Angle. Once that match was over he ventured into MMA and after one fight he was in the UFC. He worked in UFC for almost four years defeating Heath Herring, Frank Mir, Randy Couture and Shane Carwin. For those who say he couldn’t handle the UFC take a look at those names and tell me he couldn’t handle.

During this time he was diagnosed and treated for diverticulitis which in my opinion made him weaker and a lot more vulnerable to punishment in his ribs and kidneys. He lost his last two fights against Cain Velasquez and Alistair Overeem. However after his last loss some started to wonder if he would go back to the WWE.

The Brock Lesnar-WWE rumors started in October 2010 when The Undertaker confronted Lesnar after his lost to Cain Velasquez at UFC 121. Now you fast forward a year and a half and he makes his return to the WWE one day after Wrestlemania. Ten years ago he made his WWE debut the day after Wrestlemana.

So what does the future hold for Brock Lesnar? Who will he wrestle? And who will his opponent be at Wrestlemania 29? Stay tuned because it’s going to be an interesting year long ride.