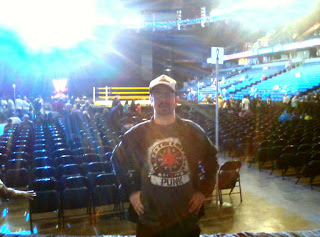 In November 1996 I went to my first pro wrestling event. It was WCW Monday Nitro. I had always loved wrestling as a kid and enjoyed watching it on TV. Over the last 15 years I have been to five Nitro’s, two Smackdown’s, two Raw’s, one WWE House show, and one TNA house show. It’s always easy to criticize when you’re home and watching it on TV. Last night’s event was in my hometown of Grand Rapids, Michigan at Van Andel Arena. Not only were we treated to the Smackdown taping’s, we also got to see NXT, and WWE Superstars. The show was over three hours long and well worth the price of admission. I am sure if I were at home this Friday and watching Smackdown I wouldn’t have been into it as much as I was last night. There was a lot to cheer about last night.

For those who knock NXT, I believe it’s a great concept and it gives the fans an idea of what superstars are possibly going to be great in the future. The wrestling is great, but the cheesy storylines we can do without. I hope they continue NXT and keep bringing up new talent. They had one superstars match which had The Uso’s taking on Hunico and Camacho. It was a good solid tag match right before Smackdown.

Smackdown was a lot of fun especially with all the fun stuff Big Show was doing. He and Randy Orton were the dark match main event against Cody Rhodes and Daniel Bryan. I also enjoyed the Smackdown TV main event between Sheamus and Mark Henry. It was a good solid wrestling match for both of them. The price of admission was definitely worth it especially for the seats we had. We had some good seats but then again there is a not a bad sport in Van Andel Arena.

For anyone who is a a fan of WWE or pro wrestling go to a WWE show. The production and entertainment value is well worth the price of admission alone. Then to see your favorite superstars on top of it makes it all the more exciting. To see photos of last nights event go to https://www.facebook.com/HollywoodsWorldofSports and browse through the photos. You’ll definitely understand when I say there is nothing like experiencing a pro wrestling show live.