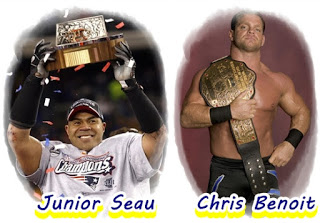 On June 24, 2007 WWE superstar Chris Benoit took the lives of his wife and son Daniel which sent shock-waves all over professional wrestling. Everyone from Nancy Grace, Marc Mero and other anti-WWE people who had beef with the company were screaming steroids, roid rage and things of that nature.

However after many months of testing it was concluded that Benoit severely damaged his brain that it resembled the brain of an 85-year-old person with Alzheimer’s. It also showed he had an advanced form of dementia, These same results were found in four former NFL players who had multiple concussions during their NFL career. Studies have proved that trauma like this can lead to severe behavioral problems as well. Benoit’s death changed WWE standards for drug testing and wrestlers health. WWE will make wrestlers stay out of action until their concussions have healed. They also have a strict drug testing policy in which if a performer fails they are suspended without pay. They also pay for all past and present superstar to entire rehab and treatments center if they so desire. WWE has changed so much in the last five years to protect it’s performers but have other sports

Fast forward nearly five years later on May 2, 2012 and news broke that former NFL Linebacker Junior Seau was found dead which was caused by a gunshot wound to the chest. Investigators are treating it as a suicide and that concussions may caused brain damage which may have led to depression. Seau did have multiple injuries in his career and was also involved in a major car accident years ago.

One question that needs to be answered now and that is, is the NFL doing enough to look after players past and present and their safety. From all the legal battles with former players and their health one has to wonder if the NFL is what WWE use to be. People will say their is no comparison because one is a sport and the other is entertainment but they are both physical and can wear your body down to nothing like has a lot of them.
The one sad thing that came out of both tragedies is that no one saw them coming. If Seau was depressed or acting differently no one has said so. People within WWE knew something was wrong the weekend Benoit killed his family and himself but didn’t think that it would be that. The only difference between Benoit and Seau is that Seau didn’t take anyone else’s life except his. One has to wonder if Seau will ever be looked at the same again. For Benoit, it’s like he never existed in WWE and there has been no mention of his name in 5 years.
I have often noticed when a pro athlete and pro wrestlers career is over, a lot of them have a hard time dealing with life after the spotlight is off them. They get into drugs, alcohol, commit crimes and sometimes take their own life leaving many with unanswered questions
With that being said, I think professional organizations such as WWE, NFL and others should create programs that assist retired athletes to keep them productive in society. So many lives could have been saved if they were productive in society. Countless lives could have been saved if more testing were done on these athletes to make sure they are fully able to play.
No one will ever know if Benoit and Seau’s lives would have been saved if more testing and more measures were taken to keep their health a main priority. I hope this is a wake up call to all professional sports organizations to take better care of their athletes and hopefully more lives will be saved and players past and present have their health taken care of. In the end, I don’t think that’s asking a whole lot. Let’s learn from the past, and work on taking of the future.
NFLWWE
Please Share This