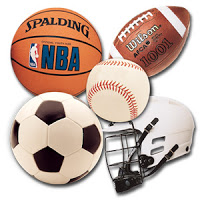 Not long
after hitting my head, I was starting to feel light headed, nauseas, and got
dizzy a few times.  Next thing I knew I
was vomiting. These symptoms kept going on throughout the night and into the
next day. What I thought to be a really bad headache turned out to be a
concussion.  Now I know working in retail
is not the same as playing in sports at a high level but a concussion is a
concussion.
If you are
an athlete or anyone for that matter that has symptoms like these you need to
go to your doctor. One thing I have learned from Junior Seau and Chris Benoit
is that these concussions should not go untreated. Both men had multiple
concussions and look at the end result. I have only had one concussion and one
is enough. It temporarily set me back and it’s not something you ever want to
experience.
I hope by
reading my story and just how something so minor can turn into something so big
if you don’t get it checked out and treated.
Concussions are starting to play a bigger role in how athletes are
treated.  I follow all sports as well as
WWE and the standard procedure is that athletes have to pass concussion tests
for them to be able to participate again.
Finally,  I urge anyone who has concussion like
symptoms to get  them treated so you don’t
have a tragedy like Chris Benoit and Junior Seau. These are only two of the
many people who have suffered from multiple concussions. Do yourself a favor
and avoid the same problems others have had and take care yourself so you dont
suffer in the long run.
MLBNBANFLNHLUFCWWE
Please Share This