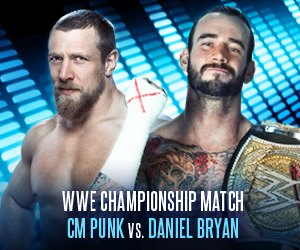 When people look back on the WWE Over the Limit 2012, one match will be remembered. The under-card was good, the main event was comical but CM Punk and Daniel Bryan put the meaning back into what a WWE Championship match is suppose to be. Pure wrestling, high risk maneuvers, and use any move you possibly can to wear down your opponent. Both men did just that. CM Punk won with a roll-up counter to the Yes Lock but Punk started tapping out after the three count which means this feud is far from over. The fans were solidly behind both men and behind the match itself. At one point they were chanting “this is awesome!” The match was indeed awesome and I really hope WWE is smart with this feud and continues with it because Punk and Bryan are both great wrestlers and deserve to spotlight on them right now. Punk is currently on a 6 month title reign and he’s had great matches with everyone he’s been in the ring with. Punk’s title reign is one of the most significant one in a long time. With that being said Punk and Bryan need to be the main focus of the WWE Title scene through the summer and have some classic matches.

Speaking of classic matches, I have to give the fatal four way World Championship match some props. Sheamus, Alberto Del Rio, Randy Orton and Chris Jericho all had great outings last night and it made for a chaotic match. However made this decision to book this match made the right call because I honestly don’t think Del Rio vs. Sheamus would have matched well with the Punk-Bryan match. In the end, through all the punishment Sheamus retains the title and continues his momentum as champion.

The Main Event of the evening was comical, and predictable. John Laurinaitis took on John Cena. Cena had his fun, and roughed up Big Johnny but in the end the Big Show KO’d John Cena allowing Big Johnny to win the match and keep his job. The match was everything I thought it would be but it my opinion it shouldn’t have been the main event. I felt one of the title matches should have been the main event.

Over the Limit was a good solid pay-per-view but I wouldn’t say it was great or epic. Extreme Rules was very hard to follow but the three title matches I talked about made the show flow. I would give Over the Limit a 7 out of 10. The three big title matches were the key to this pay-per-view and I would stay tuned for more as WWE builds on what they did the last two pay-per-views. The show may have been called Over the Limit, but these storylines and feuds haven’t reached their limits yet.
WWE
Please Share This