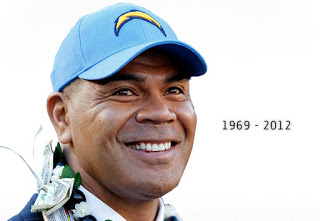 Today was a shocking day in the world of sports. Junior Seau was found dead by his girlfriend which apparently was caused by a self inflicted gunshot wound to the chest. I have always seen Junior Seau as an outgoing and stand up guy.

Seau was drafted number 5 overall in 1990 by the San Diego Chargers after playing at USC in College. He is considered the progenitor of the “USC-NFL linebacker” group which includes Richard Wood, Jack Del Rio, Willie McGinest, Chris Claiborne, Lofa Tatupu, Thomas Williams, Oscar Lua,Dallas Sartz, Keith Rivers, Brian Cushing, Kaluka Maiava, Clay Matthews III and Rey Maualuga. He also played with Miami Dolphins, and New England Patriots. He is considered one of the greatest linebackers of all time and the numbers back it up. During his career he had 18 interceptions, 56.5 sacks and 1849 tackles. Junior always achieved many things and has many awards. Here are some of the highlights of Junior Seau’s NFL career.

The circumstances surrounding Junior Seau’s death are being investigated. I am just at a total lost for words about why and how this could have happened. What led to this? Was there any signs of trouble? I hope all these questions are answered. This was not just a great football player, he was a great man who did a lot of charity work including starting the Junior Seau Foundation and worked with the Samoan “sister city” projects in San Diego county. He also was on his own TV show called  Sports Jobs with Junior Seau which was a very intriguing.
No matter how he died, how things ended his contributions to the game of football and his community will never be forgotten. My thoughts and prayers go out to Junior Seau’s family. R.I.P. #55 Junior Seau.
NFL
Please Share This