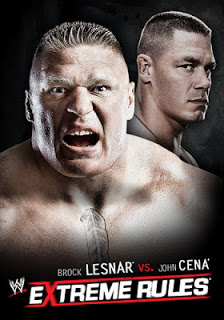 After watching WWE Extreme Rules I must say I am impressed and definitely surprised how great the pay-per-view was. Usually the last few years when WWE has had gimmick PPV’s they flop and dont live up to the hype. This one was great from the opening bell to the final one.

Kane and Orton was the opening match and it was physically as you might expect. I really like this feud unlike a lot of others. I think its always a great thing to see when two characters have no remorse for what they do to each other. I also enjoyed Ryder’s involvement in the whole thing because he and Kane have unfinished business. Orton eventually won with an RKO on the chair and it was a great way to start the show.

Brodus Clay and Dolph Ziggler had a solid match which saw Ziggler take some really sick bumps in the ring. Ziggler makes so many people look good and also gets himself over in the process. Ziggler may have lost but he is sure showing people that he can work with anyone in the company and make them look good.

Big Show and Cody Rhodes has a short but to the point match in a tables match. Big Show lost in a really funny but bad way. He stepped through the table after being dropkicked off the ring apron by Cody Rhodes. It was short and sweet but aftermath of this match is what continued the rivalry. Props to Cody for taking the second table bump. It looked brutal and painful!

This next match did not last eighteen seconds. It lasted a lot longer and should have been the match that was on Wrestlemania. Sheamus and Daniel Bryan went at it in a 2 out of 3 falls match. It went back and forth the entire time and Daniel Bryan showed why he is a submission specialist. He stretched Sheamus to his limits in the match but Sheamus proved he can work a long main event match and make it look awesome. Sheamus won the match but props to Daniel Bryan for carrying the psychology of the match.

All I am going to say about Ryback is he looked impressive beating up two skinny dudes from St. Louis. The Chicago crowd made me laugh when they were chanting “Goldberg!” I hate to say it but Ryback is Goldberg all over again. Comes in, kicks butt, and then leaves. I heard Vince loves him and that’s why he is being pushed hard as a monster right now.

Chicago’s intensity didn’t stop there. CM Punk defended his WWE Championship against Chris Jericho in a good old fashion Chicago Street Fight. This match had so much emotion, so much intensity, and many risks to it. Punk had his hometown behind him and his family at ringside which made it even more of a dramatic story. In the end it was a GTS that put Jericho away. A lot of people said this was a match of the year candidate and I couldn’t agree more. This was just as good, if not better then their match at Wrestlemania. I will interested to see where these two go next.

As you know I am not much of a WWE Diva supported but I thought it was great to see Layla make her return after a year long absence and win the Diva’s title. I think some big things are going to happen to the Diva’s division soon and I think this was just the start of it. I would stay tuned to see where this division goes.

Finally, the Main Event of what was a solid Pay-Per-View had arrived. Lesnar vs. Cena in an Extreme Rules match. This match lived up to the hype and it was all you expected and more. There was blood, bruises, broken bones, and straight up pure violence. A lot of people hate the slower style that big men wrestle in but I loved it. I thought it had the perfect chemistry, and psychology to a match featuring two big men. Lesnar proved to he could do better then what he did at Wrestlemania 20 when he wrestled Goldberg. Cena took one hell of a beating but in the end he won with the Attitude Adjustment on the steel steps.

Even though Cena won he appeared to be injured after the match. No one really knows if it’s legit or a storyline yet but he was talking to officials like he was hurt bad. With that being said, the show was extremely awesome and one of the best PPV’s in the last five years. If you missed Extreme Rules be sure to watch the replay or buy it on DVD when it comes out. It will be well worth the money. WWE finally got extreme again and now they have momentum again. What they will do with the momentum remains to be seen but Extreme Rules gets two thumbs up and a rating of 8.5 out of 10. Chicago was indeed wild, crazy and extreme.