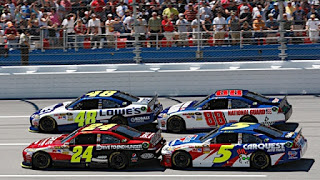 When you think of franchises in sports you think the Chicago Bulls, New England Patriots, Los Angeles Lakers, and more. This year a NASCAR franchise has been completely dominant. Hendrick Motorsports which consists of Jeff Gordon, Jimmie Johnson, Dale Earnhardt Jr, and Kasey Kahne have been a force to be reckoned with on the race track. If you don’t believe me take a look at the numbers of each driver. These numbers will back up what I am trying to say and that drivers have to work hard just like anyone else.

Although it seems Kahne and Gordon are struggling they have picked it up the last few weeks. Lets not forget Jeff Gordon has won 4 Championships and Jimmie Johnson won 5 in a row. Every week that NASCAR has been on the announcers have been talking about one of the four Hendrick cars being in contention for a win. Henrick has won the last 5 races and achieved his 200th win as a car owner in the process.

The one driver to look out for is Dale Earnhardt Jr. He has not won a race in 2008 and he puts himself in contention every week to win a race. We are halfway to the chase and there is a good chance all four Hendrick Motorsport cars can make the chase. Kahne is not far but Gordon will have to win a few races and finish with better consistency. So the question remains, can Hendrick Motorsports take over NASCAR in 2012 and for many years to come? Stay tune to find out. 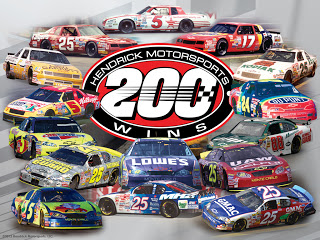