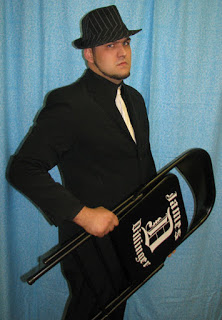 From the Marines to Pro Wrestling James Dillinger has traveled all over serving the United States. He spent four years in the military being located at Camp Johnson and Camp Pendleton. I had the opportunity to interview James on his life as a professional wrestler. Here is what I found out about the former Marine

What are your first memories of pro wrestling?
Well, my dad was always a huge pro wrestling fans so it was on the TV a lot. When I was a toddler I was a huge Roddy Piper fan, I would carry my big LJN action figure everywhere. The oldest memory I have of watching would be Hulk Hogan vs Randy Savage from Wrestlemania 5. I remember sitting on the floor at my grandpa’s house just filled with emotion, and excited to see how it was going to end.

What made you want to be a pro wrestler?
My whole life as far back as I can remember it is something I have always wanted to do. I never really knew how to get into it. I attended an indy wrestling show a few months after I got out of the Marine Corps and I talked to a few guys about it. I decided that day to start training.

Who trained you and how have they helped you since then?
I trained at Eric Freedom’s Electric Kompany. Eric has helped me a lot over the years. The biggest thing he did was got me a lot of work when I first started. Down in the Chicago area, southern IL and around Michigan. He’s also put me in the ring with a lot of veterans and names, which has helped me learn a tremendous amount.

Who has been your favorite opponent work with so far?
I would have to say Mikey Zeroe. We have worked together a lot. No matter what it was always fun. Right now, my favorite guy to work with is John Campbell. We travel and train together, so we pretty much know each other inside out. Plus, we have pretty go matches together. John is a talented guy and I think a lot of people are starting to see that now.

What is your favorite match that you have been in so far?
I have a lot of them. I also have a lot I hate. But, I’d say my favorite this year would have to my match with David Hokinson up at UWE last month. It was a lot of fun and I think it went pretty well.

If you could choose any type of match to compete in what it would be?
Cage, I’ve been doing this for a while and haven’t gotten the chance. The one time I was supposed to, the show got canceled.If you could work for WWE, TNA, or ROH which one would you work for any why?
WWE, Money and that is everyone in this business’ goal/dream. If they say otherwise they’re lying.

Any favorite road stories you’d like to share?
One time, Mikey Zeroe and I told this kid that it was custom that on the first show of the year all rookies have to wear a mask the whole day. So we got this kid to ride like over 4 hours with this mask on. He got to the show and started shaking hands while people just looked at him like he was a moron. Anytime I can get drunk with the Wang Hang Gang and try to see if we can get John Campbell kicked out of a Denny’s. The ride home is always fun, especially when John starts to flip out because we are all wasted.

What do you hope to accomplish in pro wrestling?
Just to do this for as long as I can, I’d love to be able to make a living doing this, but right now I am happy just being able too.

What should people know about James Dillinger?
Right now, they are seeing me better and more focused. I lost sight of the reason why I wanted to do this in the first place. 2012 has been one of my best years in a long time. I just lost almost sixty pounds. In the past I’ve been complacent with what I was doing. That type of thinking is in the past. I’ve been training my ass off, working on my in ring skills, promos and gimmick.Any final thoughts?
I’d like to thank all the guys who have helped me turn this new page in my career. If it wasn’t for them I probably wouldn’t even be doing this anymore. Adam Reynolds gave me a pretty eye opening talk back in November, which kind of set me on this course. Eric Freedom for always giving me chances when he didn’t have too. John Campbell for always being there to push me back on track when I lose focus. Josh Raymond for inspiring text messages. PeteDaddyDolla, for workout advice, he might be a ring announcer, but the guy has one of the best bodies in the state. Also I’d like to thank , Max Morrison, Jimmy Blaze, and Alcatraz for always lending advice. Last but not least my girl for always putting up me, and allowing me to be gone all the time
Please Share This