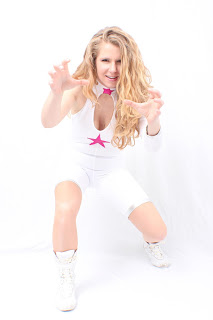 Since 2004, a beautiful and talent woman has engaged entertained and competed in pro wrestling and mix martial arts. Sybil Starr hails from Chicago Illinois but had made her home in Michigan. She has competed all over the United States, Japan and Greece. If you wanted to describe Sybil in one word you couldn’t. She considers herself many thing including Warrior Poet, Actress, Model, Professional MMA fighter, Professional Wrestler, Catfighter, Boxer, Mixed Wrestler,and Oil wrestler.

I first met Sybil Starr in 2005 while at a Price of Glory Wrestling event in Coldwater Michigan. I could tell right away she had talent, skill and class. From that point I knew that Hollywood’s World of Sports needed to do a interview or story on here. I got that opportunity and here is what Sybil had to say.

What are your first memories of professional wrestling?
I grew up with Professional Wrestling and I can’t remember a time in my life when I wasn’t a fan (besides maybe college, when WWE pretty much sucked, like it does now)

What made you decide to get into pro wrestling?
I was modeling and Dan Severn’s office got a hold of me about doing some promotional modeling of Dan’s T-shirts and such. I am a huge fan of Dan Severn and wrestling and fighting, so I came out and shot the pictures. When I got to the Michigan Sports Camp (November 2004) I asked if I could do something with their professional wrestling shows since I was such a fan. They told me that I could be a valet, the pretty girl who walks someone out to the ring, in the tradition of Miss Elizabeth. . .and so it began, I did my first show soon after and made my debut as Desmond Duke’s Valet. Soon after, the training facility asked me to come and train in professional wrestling with them. 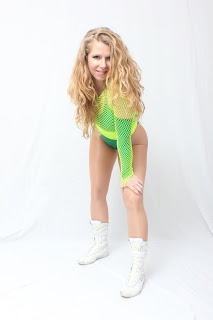 Who did you train with and how have they helped you in their career?
My trainer at Michigan Sports Camp was mostly Jack Thriller. How did he help with my career? I just think I have had the privilege of working with one of the best! Lately I have also been doing some training with BoneKrushers in Cincinnati, OH with Roger Ruffen also, I have learned a ton from him also, and I am glad that the Starr Girls have had the chance to train with both these great guys!

What made you decide to expand your skills and train in MMA?
Professional wrestling is one of the hardest things I have ever done or attempted to learn. I am not the most graceful of people to start with (don’t ask me to dance, I have two left feet!!!) And I was taking training in Brazilian Jujitsu before I started professional wrestling. I really just wanted to expand my skill set and Dan Severn himself used to teach MMA classes during the day at the Michigan Sports Camp, so I was very privileged to get to train with him there. I met some really great fighters and trainers through Dan. I have a passion for wrestling and fighting, but mostly for doing it, not watching it. . .

You have met a lot of legends in pro wrestling in you career, who has been your favorite to meet and why?
Roddy Piper. becuase he is awesome and wears a kilt.

If you could wrestle for WWE, TNA, or ROH, which would one would you choose and why?
None becuase I have already chosen. I created venues exclusively for women fighters and pro-wrestlers. I am making a place in the world for women like me.

What is your message to young females who look up to you?
Every girl should take martial arts.

What are some of your future goals?
To go fishing everyday.

Any final thoughts you’d like to share?
Please make sure every one checks out our Real Underground Female Fight League and also the Starr Girls Professional Wrestling Association! Thanks!

To find out more about Sybil Starr and where she is competing check out
http://sybilstarr.com