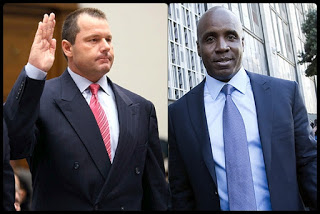 In 2005, Jose Canseco, Alex Rodriguez, Rafael Palmeiro, Mark McGwire, Sammy Sosa, and Curt Schilling all testified in Congress.  McGwire, A-Rod, and Palmeiro all said they didn’t use steroids but later on admitted that they did use steroids. None of these players went to trial but two players did. Barry Bonds trial was last year after being delayed for two years. He was indicted because of the BALCO investigation and was being charged of indicted on four counts of perjury and one count of obstruction of justice. He was only charged with obstruction of justice and placed under house arrest. Bonds trainer Greg Anderson has spent numerous times in jail for protecting Bonds and also being linked to Jason Giambi and Gary Sheffield. Giambi as an admitted steroid user. In the end Barry Bonds holds the record for most home runs in a single season and the most home runs all time.

Roger Clemens has had two trials with the first being in 2011 and the second being this year. He was on trial for  one count of obstruction of Congress, three counts of making false statements and two counts of perjury in connection with his testimony. in February 2008 in front of Congress. The main witnesses in this trial were his former trainer Brian McNamee and Andy Pettitte. McNamee said he supplied Clemens with steroids when his name was mentioned in the Mitchell Report.

The Mitchell Report was released in 2007, two years after the initial congress hearing. Some of the notable names listed in the report include Andy Pettitte,  Barry Bonds, Gary Sheffield, Troy Glaus, Rick Ankiel, Juan Gonzales, and Miguel Tejada. The only one who admitted to any steroid use to George Mitchell was Jose Conseco. Conseco wrote the book, Juiced: Wild Times, Rampant ‘Roids, Smash Hits & How Baseball Got Big. He listed all the names of people he saw taking steroids or talked about steroids with. This is how this how the whole thing got started in 2005.

Fast forward seven years and what has been accomplished? Absolutely nothing. The United States government has wasted a lot of time and money on these trials and hearings. When it comes right down to it the general public does not care if athletes use steroids. If they cared do you think two jurors in the recent Clemens case would have been dismissed for falling asleep? No but the government continued on until they found Clemens not guilty.

It might be one thing if the government gets involved with player strikes, or major cheating scandals like the Saints Bounty Scandal which people actually care about but no one cares that baseball players took steroids. A lot of people feel that steroids saved the game of baseball after the strike in 94-95. People got interested again when Mark McGwire and Sammy Sosa started chasing the home run record.

The US government has tried sticking their nose in the NFL, NCAA, NBA, and obviously MLB. None of it by any means has been successful. After the Clemens trial the only trial I want to hear about is the Jerry Sandusky trial. He committed crimes unrelated to sports and that is one that is legitimate. I will be curious to see how involved the US government gets with the New Orleans Saints Bounty Scandal. I believe it will and again millions of tax dollars will get wasted.

Let these professional sports organizations police themselves. All of the commissioners in pro sports in America right now are doing a pretty decent job. Leave the duty up to them. I think some new laws need to put into place. Instead separation of church and state, we need to have separation of sports and state. The government should only get involved in crisis situations. For the time being we have to deal with what is and hope that things change. The Roger Clemens trials need to be a lesson to government. Quit wasting tax dollars on trials with incompetent witnesses who are just trying get fame. Quit wasting your money on trying destroy sports in America. Let the players play the game and let them suffer the consequences of whatever they put in their bodies. In the end, the only ones that will suffer is them.