skip to Main Content
This Sunday is TNA Slammiversary 10 which marks the 10 year existence on TNA Impact Wrestling. It started in Nashville and now it’s gone global and to live TV. So many names have been in TNA but today you have Sting, Angle, Hardy, RVD, Hogan and many more. This Sunday TNA put a great card together and it should be a show for the ages. Here is the lineup for the show/ 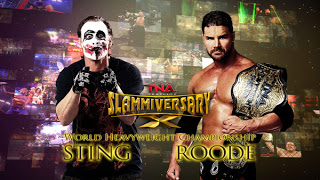 This match is really great for business if they keep the title on Bobby Roode. They need to have Roode win this match in order for the company to move forward. Sting is great but he is in the past and his job should be making the younger guys become superstars. With that being said it’s going to be Bobby Roode coming out on top. 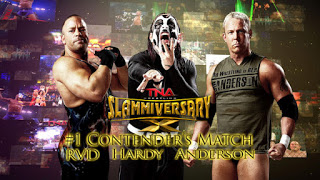 This is what I call a WWE dream match because this would have been a great WWE match. All three men have been on a roll as of late. I think when it comes down to it, Jeff Hardy will challenWEge the World Heavyweight Champion. The fans still love him and he has totally cleaned up his life for the better. It could go down as one of the best comeback stories of all time. My pick is Jeff Hardy. 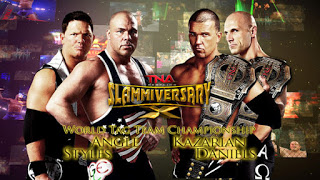 Daniels and Kazarian got this hook, line and sinker. AJ Styles is too distracted with all of the Dixie Carter drama and Kurt Angle needs to be a singles competitor. I like the team of Daniels and Kazarian. Both are great wrestlers and their roles in the company are even better right now. I like this newly formed tag team and I hope they are long term. Kaz and Daniels all the way. 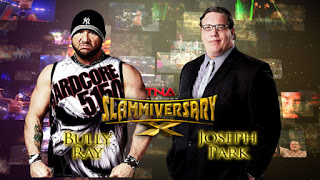 We all know this is Abyss. I like the fact that he has different alter ego’s but I prefer Abyss over the lawyer.  Bully Ray has really come into his own as a singles heel competitor. I believe at some point before, during or after the match Abyss will come into play. However in the end, I think Bully Ray will win the match and continue his heel ways. I like the direction Bully Ray is headed in. 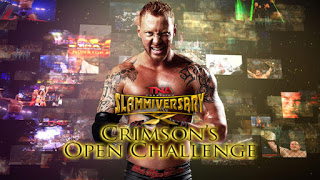 Crimson is still undefeated and he is calling out anyone, including Goldberg. Many people have speculated that Christian Cage could appear for this or for the TNA Hall of Fame per the agreement WWE and TNA had for allowing Ric Flair to appear at the WWE Hall of Fame. I am not sure who it could be at this point but I have a feeling it could be big since this is the 10 year anniversary. 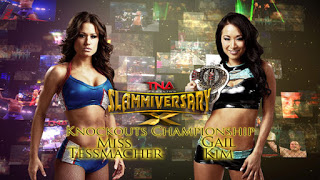 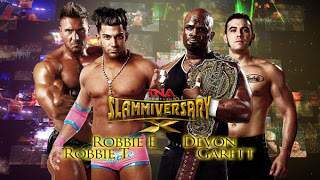 I am not sure how this match came about because Garrett hasn’t been doing much but I am predicting that Robbie E and Robbie T win the match, They have better chemistry and the lack of experience of Garrett Bischoff will come into play. Robbie E and T should be in the hunt for a tag team title shot down the road if they win this match. I think Jersey Shore bad boys are going to be the winners in this match. 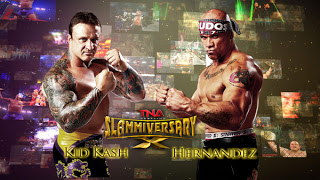 I am not sure how this match was booked but I like it. Both are very accomplished and underused wrestlers.  Hernandez should have been World Champion by now but he hasn’t Kid Kash has always been under appreciated so I think both men have a lot prove in the match. I think Hernandez will win this match and start getting pushed heavily again as a singles wrestler. He deserves to be one of the top guys in TNA and hopefully this is what gets him there again. 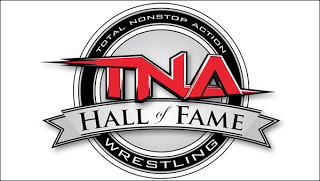 I am not sure who will be the first inductee into the Hall of Fame in TNA. Many people are saying Christian Cage and I stated that earlier because he is on his way to Dallas for the Slammiversary weekend. If it’s not Christian then I am not sure who is. A lot of people say Jeff Jarrett should be because he is the founder along with his dad Jerry Jarrett. I will be curious to see who it is and how the reaction is.
TNA Slammiversary is this Sunday and it is a celebration of 10 years of some pretty great wrestling. It’s given people an alternative and a new platform for wrestlers to perform on. For all of the criticism of TNA Wrestling, it has done wrestling a lot of good for it to be around. Hopefully in the next 10 year things will be even better.
Please Share This