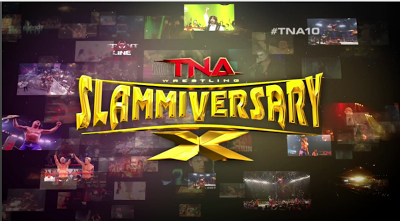 Last night was TNA Slammiversary 10 which marked the 10th year of the TNA Impact Wrestling existence. I thought the pay-per-view was pretty solid and it started off with Austin Aries defending the X Division Title against Samoa Joe. They had a solid opening match and I have to say Austin Aries is on fire right now and coming into this own. It seems like they are making him one of the faces of the company. I do think they need to start utilizing Samoa Joe in a better way because he is one of the most talented wrestlers out there and he deserves the chance to shine one again. It was a good match to open the pay-per-view.

I don’t know how the Kid Kash and Hernandez match got made but it was a very solid match. Both men had something to prove because neither of them have been on TV in a long time. Hernandez was being pushed for the longest time as a singles competitor and I think he should be once again. Kid Kash is still a great high flyer and needs to be a mainstay in the X Division. Hernandez wins the match and hopefully gets on a good singles path again.

RVD, Mr. Anderson and Jeff Hardy showed me why I love triple threat matches so much. They had a really great match for the number contender spot to the TNA Heavyweight Champion. I was shocked Mr. Anderson got the win because RVD and Jeff Hardy are on fire and have a bigger crowd reaction then anyone else on the roster right now. If Mr. Anderson is healthy and back on track, they need to start pushing him hard again.

Gail Kim who I believe is the best wrestler in the Knockouts Division finally lost to the hometown girl Brooke Tessmacher. Once a WWE developmental wrestler Brooke has come full circle and has become quite a mainstay in the Knockouts Division. I think she has really benefited from her time in TNA Wrestling and she is only going to get better. Congratulation to the Brooke Tessmacher for winning the TNA Knockout’s title.

Bully Ray and Joseph Park was so dumb you couldn’t help but enjoy it. Everyone knows Joseph Park is Abyss so it made for an entertaining match considering Abyss appeared in the match. Joseph Park won the match but we have seen the return of Abyss and hopefully he remains on consistent performer on TNA programming.
WWE Intercontinental Champion Christian made a surprise appearance talking about his time in TNA and introducing the top moment in TNA history. It was definitely cool to see a WWE performer on a TNA Pay-Per-View.

The match of the night was AJ Styles and Kurt Angle versus Daniels and Kazarian for the TNA Tag Team Championships. This match was back and forth and all four men should be complimented on the match they had. Kurt Angle made the match flow. His style stood out from the other three and made the match much more interesting. The storyline between AJ, Daniels and Kazarian is really fun to watch and I hope it continues. It’s also nice to see Kurt Angle get some gold again because in my opinion he is still the best pure wrestler out there. Kurt Angle and AJ Styles are new tag team champions but this feud is far from over which is a good thing.

Bobby Roode is the longest reigning TNA Heavyweight Champion and he took on Sting. This was a good match which Sting dominated. Sting was on his game but in the end Roode used a beer bottle to retain the title. After the match Sting went on a rampage and he destroyed Roode. I will be interested to see how this plays out in the next few weeks.
Speaking of Sting, he was announced as the first member of TNA’s Hall of Fame. He is what everyone says he is. He’s an icon, a legend and one of the greatest performers of all time. He has helped TNA become bigger then it probably ever should have been. Sting deserves to be in any wrestling Hall of Fame but it’s fitting that he is the first inductee to the TNA Hall of Fame.
Slammiversary was solid and enjoyable to watch. I can’t that about to many TNA Pay-Per-Views. They need to build on this show and start having better live TV shows. They are headed in the right direction but need to make a few more improvements for them to be a solid company. Congratulations to TNA on reaching their 10 year mark.  Like Hulk Hogan said, hopefully the next 10 will be better.
TNA
Please Share This