Tonight was the return of WWE No Way Out on Pay-Per-View and in my opinion WWE lost their momentum with this PPV. There were no title changes, no shockers and no unpredictability. The opening match between Dolph Ziggler and Sheamus for the World Heavyweight Championship was a really great match and feel that Dolph Ziggler should have been given a test run as champion. The crowd is solidly behind him now which means the fans are telling WWE that this our guy who want to represent the company. Ziggler has a lot Curt Hennig and Shawn Michaels mannerisms about him which make for an all around great performer in the ring. I hope Dolph Ziggler becomes World Champion real soon.

Cody Rhodes and Christian had another great match and I am glad Cody lost because Cody is another one who deserves a chance at the World Heavyweight Title. Christian is really starting to come into his own and he is always performed like a Main Event guy whether Vince likes him or not. I like how he carries Edge and Eddie Guerrero in his heart during his match by using some of their moves. Christian has the potential to make a lot of young guys better and become a legendary performer. I hope his reign continues for awhile.

The matches that had no point to them were Ryback against the jobbers and a tuxedo match between Ricardo and Santino Marella. Santino needs to be defending the United States Title and Ryback needs to start facing guys on the regular WWE roster. The Goldberg chants at Ryback are getting annoying as well but then again when you’re not facing real competition that’s whats going to happen. The Diva’s match was a typical Diva’s match in which Layla successfully defended her title against Beth Phoenix.

I liked the fact that WWE is somewhat trying to have a tag team division again. They had a fatal four way tag team match featuring Epic/Primo, The Uso’s, Tyson Kidd/Justin Gabriel and the Prime Time Players. The Prime Time Players consist of Titus O’Neill and Darren Young now managed by .A.W. I like this team and feel that they have a future.

The triple threat match between CM Punk, Daniel Bryan and Kane was a really good solid match. I really thought Kane should have won because he was way overlooked in the feud but after AJ’s interference and Kane carrying her out of the arena I don’t this feud between these is over yet. CM Punk has now had a seven month title reign and it’s been of the best title reigns that WWE has had in a long time.

For the fourth WWE Pay Per View in a row John Cena was in the main event and it was a non title match. People wonder why there is less interest in WWE these days? That would be the reason. The fans want to see title matches as main events. People don’t want to see John Cena in the main event every month. There are guys like Punk, Ziggler, Sheamus, Rhodes, Christian and others who deserve that spot more then Cena does. Cena beat Big Show in a decent steel cage much which saw all the Big Show’s victims get involved. At the end of it all Mr. McMahon uttered the words to Big Johnny, “You’re Fired!”

Who knows the direction WWE is headed in but if tonight was any indication then it’s going to be a long summer. I hope WWE has a good 1000th Raw on July 23rd and a good Summerslam in August.There is one major storyline already set in place for the summer and it’s this: 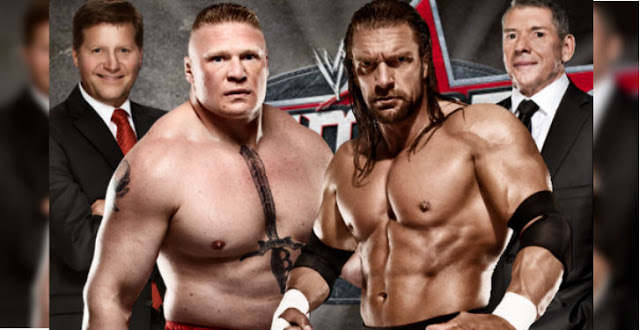 Triple H challenged Brock Lesnar to a fight at Summerslam at No Way Out and this to me should be the selling point of the summer along with Vince being back on TV regularly. WWE needs to have a good summer and tonight was not a good start. Hopefully Money in the Bank,  and the 1000th Raw will give them a ton of momentum headed into Summerslam. At the end of the night No Way Out gets a 4 out of 10 and hopefully WWE delivers a lot better the next time around.