Long before June 27, 2011 I was a fan of CM Punk. I remember in the early 2000’s when YouTube was getting popular I remember watching matches of this young kid with long bleach blonde hair taking on guys like Eddie Guerrero and Rey Mysterio in IWA-MS and becoming a rising a star in Ring of Honor. I remember in 2006 when debuted on an edition of ECW on SyFy. A friend asked me why I was so excited. Simply put, I told my friend, you’re looking at one best wrestlers on the indy scene. Fast forward five years late and his contract was set to expire in July of 2011.

CM Punk felt he was being held back and on the fateful June night he cut that promo the sent shockwaves around the wrestling world. He then went on to leave the WWE on July 17th with the WWE Championship after defeating John Cena in his hometown of Chicago. On July 25th he returned to Monday Night Raw and he began verbally attacking Triple H, John Cena, Kevin Nash and the McMahon family. Even though he lost the title at Summerslam due to Alberto Del Rio cashing in the Money in the Bank he always made you tune to find out what he was going to say. His mic skills were as great as his ring skills and that he was getting to be on top of his game. 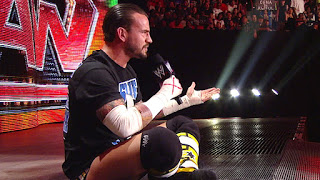 A lot of people always wondered why did CM Punk wore a Stone Cold Steve Austin shirt the night of his famous promo? I believe he wore that shirt because he had his Austin 3:16 moment where he finally broke out of his shell and became the performer and wrestler he wanted to be. As most people know Austin was dubbed “The Ringmaster” upon his arrival in the WWE. He hated the character and gimmick so when he had a chance to break out he took his opportunity. CM Punk chose to breakout by cutting the promo. After this promo the fan were solidly behind him as he became one of the most popular WWE Superstars on the roster. He was selling the most merchandise and delivering the best promos and matches.

He regained the WWE Championship at Survivor Series in 2011 and has held the title since. He is the longest reigning WWE Champion in 6 years with over 220 days as champion. As champion he has taken all on all comers but one has to wonder where would CM Punk be if he wouldn’t have cut that famous promo on June 27th of 2011. CM Punk was already accomplished before he cut that promo. If you don’t believe here is a list of his accomplishments.

He has accomplished so much in his career but the famous Pipe Bomb promo put him over the top. I encourage anyone who reads this to get on YouTube and watch some of Punk’s matches from his days in IWA-MS, TNA, and ROH. You will then understand why I was so impressed him before he even started in WWE. When CM Punk says he is the best in the world, he truly means it and feels it. CM Punk is at his peak right now so keep tuning in to watch what he is going to do next.