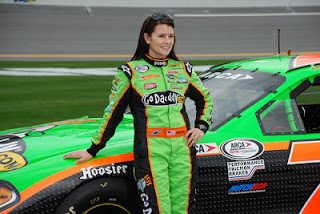 This past weekend at the Daytona Nationwide Race Danica Patrick qualified 3rd and ran very well throughout the race even leading 18 laps in the race. With the 18 laps a wreck occurred and Danica was involved again. It seems like every week for the last month her fellow male drivers have wrecked her. Whether it be intentional or unintentional I find it kind of odd that it keeps happening to her. I have never seen a driver involved in more wrecks in one season then her. You can say it’s bad luck all you want but lets face it. The male drivers are on the Nationwide Circuit are intimated of Danica and don’t wont to lose to a woman. A lot of of NASCAR purest hate the fact that a woman is driving in their good redneck sport. I personally think it’s great for the sport because Danica has a huge fan base and if she’s successful more people are going to tune. So if I was Danica’s agent or a representative of her and she asked me for advice I would meet with her crew chief Tony Eury Jr. and car owner Dale Earnhardt Jr. and tell them how I would handle it.

Firstly, I would tell Tony Jr. to start to talking to fellow crew chiefs and threaten to take them to NASCAR officials to be investigated to see if they really are trying gang up on Danica Patrick. Crew Chiefs have to power to reprimand their drivers and tell them to back off. The Crew Chiefs and spotters are just as responsible out there as the drivers are. I am surprised Tony Jr. has not been in any fights this year with other Crew Chiefs this year because of all of this non-sense. Eury needs to step up and start confronting others who should be held accountable for what they do on the race track.

Secondly, I would tell Danica that if she feels threatened on the race track then start retaliating and wrecking someone back. I know it sounds bad but she needs to show that she’s not going to take any crap from any of the other drivers on the track. I know she’s not Dale Sr. but when someone wrecked him intentionally he would came back and get them back eventually without making it look intentional even though it was. Danica needs to stand up for herself and show her toughness and prove to the critics she’s just not a pretty face behind the wheel.

Lastly, if I was Dale Earnhardt Jr. I would get behind the wheel in a Nationwide race and protect my investment. I don’t think a lot of people would intentionally wreck Dale Jr but if I was him I’d protect Danica and race right behind her the entire race. What these drivers should realize is by wrecking Danica they are costing Dale Jr. money because he owns Danica’s car. If I was a car owner and my driver was getting wrecked regularly I would be pissed and I would do something about it. In my opinion Dale Jr. needs to do something about it.

Do I think the male drivers are afraid of Danica? Yes I do. I don’t think they would know how to handle a woman winning a race or even winning a championship. Danica’s best finish this year is 8th and currently 9th in points. I think she has the potential to win a race this if she doesn’t get wrecked by another driver. All I got to say is Danica keep racing hard and earn respect out there and you’ll eventually win a race and be accepted by others on the track. W