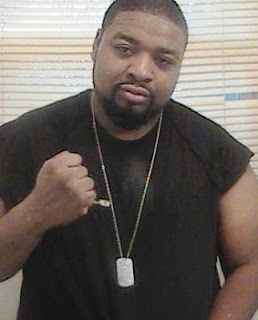 In the twenty plus years I have been watching wrestling I have seen a lot of big men in the squared circle. Some good, some not so good and some really impressed me. In 2005 when I traveled down to Coldwater Michigan I was surprised to find one of the most agile big men I have ever seen. He was teaming with Rastakhan and during the match I saw something blew my mind. A  spring board moonsault from the send rope from Fabuzio. I first thought of Vader but this moonsault was more impressive then what I had seen Vader do just because it had a huge impact.

Once I saw Fabuzio I knew I had saw a special human being and a special athlete. Seven years later Fabuzio is still wrestling down in Coldwater and still impressing fans with his agility. I had the opportunity to find out more about Fabuzio’s journey and what led him to become a pro wrestler.

What are your earliest memories of pro wrestling?
My earliest memory of wrestling is pretty much what you would hear alot of the boys say. Wrestlemania 3, Hulk vs Andre I can remember being a kid wanting to watch a movie called Howard the Duck instead of Wrestlemania but my cousins who were up for the summer and out voted me to watch Wrestlemania. I was sour about it because I really wanted to see this duck from outer space but forgot all about my feathered friend when I saw that main event and the rest is history, haha.

What made you want to get into pro wrestling, and who influenced you?
I wanted to get into wrestling when I would watch it and could feel myself in the ring. It’s really something I cant explain but I knew it’s where i wanted to be at!
What are your first memories of training at Dan Severn’s Michigan Sports Camps?
My first memories of Dan the Beast Michigan Sports Camps was first walking into the facility and seeing The Alpha Male Monty Brown, Dan Severn and a few of the other guys. I was just overwhelmed to be that close to someone I used to watch and follow. I never forget that you had to earn your way into the wrestling ring you just didnt get in and start doing some b.s. They really train you there and I remember having to pass blue mat matches which was meant to teach you how to work in case the ropes break, work on your chain wrestling and everyone watched and critiqued you on a pass or fail basis.
Who did you enjoy wrestling on early on in your career?
I really enjoyed working with BAM, Carter Grey, Alpha Male Monty Brown and Rastakhan to name a few.Who is your favorite opponent that you have ever worked with?
My favorite opponents to work with had to be the Perfect Connection a tag team consisting of Johnny Dollar and Noah Lott against myself and Rastakhan. I feel like everything clicked that night just felt right.
If you could wrestle 5 guys past or present on the indy scene or in one of other major companies who would they be and why?
If could wrestle five guys past or present it would be the following in no particular order. It would be Austin Aries, Shawn Michaels, CM Punk, Mick Foley and Vader.
What is your favorite match that you have watched?
My favorite match that I could watch over and over a thousand times hands down would be Shawn Michaels vs. Bret Hart in the iron man match. It doesn’t get any better than the boyhood dream coming true!
What is your favorite match you’ve competed in?My favorite match I ever competed in has to be when me and Rastakhan won the Price of Glory Tag Team Titles. It was a good match with a nice story and the fans were into it. Everything just clicked!
If you had a choice to wrestling in ROH, TNA, or WWE what would it be and why?
If i had the choice of course it would be WWE. Who wouldnt but to be honest I wanna go wherever I can get better and show what I can do. I am all about entertaining the fans no matter where or what promotion.

What are some of your favorite memories from traveling on the road?
A lot of memories from traveling on the road growing up was loving hip hop but the boys in the lockeroom are from all different backgrounds and I was exposed to some other types of music. I normally wouldnt have even given the chance to bands like System of a Down but I love that chop suey song! I can remember Rastakhan and BAM about to do a couple of high impact spots not in the ring, but in the middle of a nightclub and the waitress freakin out. I remember when Mental Insanity didnt tell me he wasnt a good driver and I had to find that out with semis barreling down on us, haha…good times.
What can we expect from Fabuzio in the future?
My last thought to leave you with is what I always say to the ring “Watch out because somebody is going to get punched right in the face!”
Please Share This
This Post Has One Comment