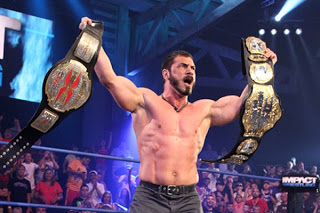 When you hear the quote “best in the world” you automatically think CM Punk or Chris Jericho and their repeating use of that quote. On Sunday July 8th 2012 Austin Aries defeated Bobby Roode to win the TNA Heavyweight Title at Destination X. The interesting thing about this is that Aries forfeited the X Division Championship to earn a Heavyweight title shot so technically he never lost the X-Division crown. With that being said, Aries has dominated the TNA Impact Wrestling scene for the last year defeating such people as Bully Ray and Samoa Joe while holding the X Division title. Aries held the X-Division title for 298 days which I believe is the longest title reign for an X-Division champion. Aries has also held the Ring of Honor Heavyweight title on two separate occasions.

Aries made his debut almost 12 years ago and has wrestled for TNA, ROH and Dragon Gate. He has had numerous feuds with Matt Sydal, Roderick Strong, Jimmy Rave, Jimmy Jacobs, Tyler Black, and many more. He has held 12 title reigns throughout various promotions in the United States. For WWE fans who don’t know Aries he played the voice of Jacob Cass in WWE 12 and attempted to try out for WWE’s most recent version of Tough Enough but failed to make it. I am sure looking back on it now WWE probably wishes they had Aries who has brought a lot to TNA in the last year.

For those who think a smaller man shouldn’t be the Heavyweight Champion take a look at Shawn Michaels, Eddie Guerrero, Chris Jericho, Rey Mysterio, and CM Punk. They all are tremendous performers and I believe Austin Aries is becoming a tremendous performer. He ended one title reign on Thursday and began a new one on Sunday but it was all his choice.
With Austin Aries dominating the X-Division and now becoming the new TNA Heavyweight Champion,  does this make him the best in the world? Only time will tell.
Other results from the Destination X: