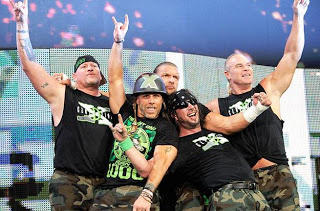 Monday Night at the 1000th episode of Monday Night Raw, there were two images that stuck out in my mind. The first one started the night off and that was when DX had a reunion but it wasn’t just Shawn and Triple H. They brought out the other members of DX from 1998 which saw Billy Gunn, Road Dogg, and X-Pac come out to join the party. They were having lots of laughs and the out came Damien Sandow, the WWE’s version of a pure moralist. He ripped into DX saying they brainwashed the crowd and that if he got beat up he’d by a martyr. Well he got beat up by taking a superkick and a pedigree and ended that segment with a bang. That was not the last we saw of Triple H in the evening. Triple H called out Brock Lesnar which led to Paul Heyman coming out and talking about Triple H’s children. These words brought out Triple H’s wife Stephanie McMahon. Stephanie began to verbally and physically abuse Heyman until Lesnar hit the ring and fought Triple H toe to toe.

Speaking of reunions, the Brother of Destruction reunited by taking out 6 disgruntled jobbers. Kane and Undertaker brought a lot of memories back since they have been apart of each others careers since Bad Blood 1997. The Undertaker was still sporting the mohawk from Wrestlemania 28. Speaking of jobbers, Jack Swagger lost in about 30 seconds to Brodus Clay. Clay and Dude Love had a dancing session at the end of the match. 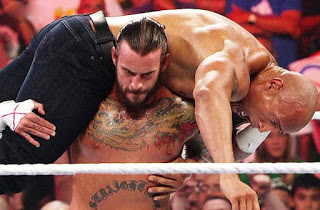 Heath Slater has been losing to legend after legend and this time was no different. Heath Slater lost to Lita after some help from the APA. After the match all the legends that Slater has lost to came out and celebrated  with Lita. Lita was not the only Diva that was highlighted on the night. AJ was all set to marry Daniel Bryan until she said a different man had proposed to her. That brought out Vince McMahon to announce that AJ was the new General Manager of Raw. I think AJ as GM is going to be very fun and entertaining. I think it’s going to create a lot of buzz every Monday night.

There was only two matches in my opinion that stood out to me and that was the 6-man tag in the beginning which featured Sin Cara, Rey Mysterio, and Sheamus on one side with Dolph Ziggler, Chris Jericho and Alberto Del Rio on the other side. Sheamus and company won the match after Ziggler attacked Jericho to cost them the match.

The Main Event featured WWE Champion CM Punk taking on the man who cashed in his Money in the Bank Briefcase winner John Cena. Cena and Punk went back and forth the entire match. When Cena finally got control the Big Show interfered in the match and caused a DQ. When CM Punk finally came to he did not help Cena. In fact he left the ring which prompted The Rock to come out and attack Big Show. Finally out of nowhere the reigning WWE Champ Punk attacked The Rock and gave him the GTS. At the end of the show Punk was standing tall above Cena and The Rock but was showered with a chorus of boo’s to end the show. People are now left wondering why CM Punk launched his attack on The Rock.

Raw 1000 was a night of reunions, legends, and shocking moments. I will say that the quality of matches could have been better. I forgot to mention that The Miz captured the Intercontinental Championship by defeating Christian. Moving forward one has to wondering what will happen with CM Punk, John Cena and The Big Show. It’s already been determined that The Rock will return at the Royal Rumble to take on whoever the WWE Champion is.

The rest of 2012 will really start shaping up what Wrestlemania 29 is going to look like. The Rock being attacked by Punk makes me think that CM Punk will hold on to his WWE Championship until the Royal Rumble. If that does indeed occur, Punk will have had a 14 month title reign which hasn’t happened in a long time. Raw 1000 made a lot of new memories and moments that fans will never forget. Hopefully we get to experience episode 2000 someday. Until then lets enjoy what we saw at Raw 1000 and see where it brings towards Summerslam, Royal Rumble and beyond. 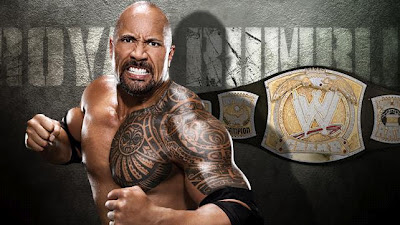