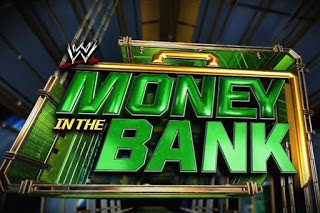 Tonight was the Money in the Bank Pay-Per-View. I for one always enjoy the Money in the Bank Ladder Matches because they are crazy and it gives you an idea of where WWE is headed.  The opening contest was the World Title Money in the Bank Contract Match that included Dolph Ziggler, Damien Sandow, Tyson Kidd, Christian, Santino Marella, Tensai,  Cody Rhodes and Sin Cara.. This match was all over the place including a few botches that made the match interesting and more dangerous then what it should be. All of these guys are hungry right now ans only one of them have had a legit World Championship reign. In the end Dolph Ziggler prevailed as he got the briefcase. All I got to say is it’s about time. The fans have been solidly behind him and he’s one of the most charismatic and talented guys on the roster. I hope WWE recognizes that the fans want him as champion which brings me to the next match.

Both World Champion Sheamus and Alberto Del Rio have great ring skills but nobody has been into what they are doing for quite sometime now. They have good matches but something is missing with both of them. Sheamus looked like he didn’t want to be there tonight and WWE is trying to get Del Rio to have a more vicious side to him. With those two factors they didn’t have that good of a match. Sheamus retains the title but with Ziggler winning the briefcase I don’t see him holding the title much longer.

There were three unadvertised matches tonight. First one saw Epic and Primo defeating the Primetime Players in a really good solid tag team match. I have always liked tag team wrestling and I am hoping matches like this will bring interest back to the tag team division. Ryback finally got some competition in the former Tyler Reks and Curt Hawkins but as always Ryback defeats two wrestlers making it look fairly easy. Then there was the Diva’s match which was a typical Diva’s match.

The most intriguing storyline of the year so far has been with AJ, CM Punk and Daniel Bryan. I have to say it’s been very unpredictable and intense like storylines should be. This match should have been the last match but it wasn’t which is okay because it was the best match on the card. Throughout the match Punk and Bryan beat each other up good and I honestly didn’t know from one second to the next what AJ was going to do. In the end, Punk took it the decision into his own hands by suplexing Bryan through a table to win the match and retain his title.

The last match was the WWE Title Money in the Bank contract match featuring John Cena, Big Show, Chris Jericho, Kane and the returning Miz. I honestly felt this match should have 3 more competitors. Since it was former WWE Champions the other three should have been Randy Orton, Rey Mysterio, and legend like Mick Foley, Kevin Nash or someone who could still work. Five men made it to obvious and made it very limited. There were some good highlights in the match but when it was all said and done, John Cena won the Money in the Bank briefcase which guarantees that he will be champion again.

This was a good show for WWE even though a championship match hasn’t been the main event of pay-per-view since Elimination Chamber in February. CM Punk is on of the longest title reigns in recent memory and the fact he isn’t the last match on a PPV is really hurting WWE and devaluing the WWE Championship. I am sorry but a John Cena match is not as important as a WWE Championship match. With Ziggler and Cena holding the briefcases it will be interesting to see where the WWE is headed. Next WWE PPV is Summerslam on August 19th so stay tuned for more coverage.