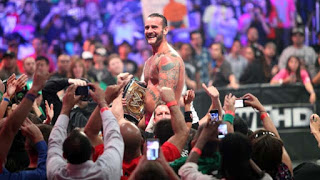 Summerslam celebrated it’s Silver Anniversary tonight and it was a pay-per-view that had a lot of good moments to it. From a wrestlers point of view it would be hard to follow the first match because the first match between Chris Jericho and Dolph Ziggler was phenomenal. I really enjoyed the style of the match and was actually quite surprised that Chris Jericho went over on Ziggler.

Even thought Kane and Daniel Bryan had a really weird buildup I thoroughly enjoyed the match because it was a true little guy vs. big guy battle that made sense. Daniel Bryan got the victory which sent Kane into a rampage and saw Josh Matthews get thrown around like a rag doll. I was disappointed that Charlie Sheen was not there to confront the man he picked on all of Raw 1000. Speaking of disappointments, I was disappointed in three things. The first thing is that Ziggler did not cash in his briefcase after a very boring match between Sheamus and Del Rio. I have been saying it for awhile that neither of them are believable as champion while Ziggler has the charisma and the look to be World Champion. I was also disappointed that The Prime Time Players did not win the WWE Tag Team Championships. I think they are a more believable tag team and more marketable as a team. Lastly, I thought Kevin Rudolph’s performance sucked and had no business being aired. That time should have slotted for Damien Sandow and Brodus Clay who were expected to be on the card earlier in the week.

The Miz had his awesome bubble entrance and had a really solid match against Rey Mysterio. For being gone as both of these guys were they have been having some excellent matches and his turned into a pretty decent rivalry. I think Miz is more believable as Intercontinental Champion, then he is WWE Champion. I will very be very curious to see how long Miz holds the title and who his challengers will be. The other championship match was CM Punk defending his title against John Cena and Big Show. Someone who has wrestling brains must have been behind this match because they used Big Show in the way he should be. It took a lot to take him down which is how it should be always. The match was good for what it was but the ending is leaving me with one question, and that is can CM Punk be fully turned as a heel or will become another Steve Austin? Even when Punk got a shorthanded victory tonight the crowd cheered. The crowd doesn’t want a heel Punk, they want a heel Cena. It’s about time Cena turns heel and goes back to Thuganomics for good. It will be interested to see how the rest of Punks year turns out.

The main event was Triple H and Brock Lesnar and I know people are going to criticize this match because of the pace. Most people don’t know ring psychology and don’t know what it means to tell a good story in the ring. Triple H and Lesnar told a story in the ring much like Triple H did with Kevin Nash in December. I loved how each man attacked the others weaknesses and exploited them. Both had their moments of offense but in the end Triple H tapped out after hitting two Pedigrees. It looked like as the show was going off the air, Triple H may have signaled the end of his career. I don’t think it’s the end of his career. I think it’s a part of a storyline that will unfold very shortly.

Summerslam was a solid show that had very solid matches to it. I am really looking forward to seeing where they head towards Survivor Series in November. Keep staying tune for more on WWE’s road to the Survivor Series, which is the last of the big four in 2012. Remember, only the strong will survive.