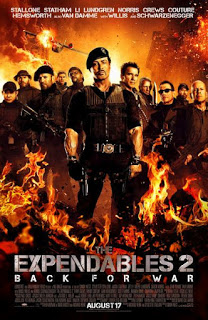 I usually don’t write movie reviews but considering Stallone was Rocky, Lundgren was Drago, Randy Couture is an MMA legend and Terry Crews was in the NFL. So it has some sports related figures to it not to mention Van Damme and Norris has been involved with Martial Arts for years. This movie was awesome and fun to watch. I like how in this movie the team faced adversity and had more obstacles to overcome in the movie. In the first movie it really felt like the team was invincible and nothing bad could happen to them. In this movie some bad things to happen and they have to fight harder to overcome it all.

The other thing I liked is Jean Claude Van Damme as a villain. I have never liked Van Damme as a villain but in this movie he played his role well and I wanted to just jump out of my seat and beat the crap out of him. You know you played your role well when you get that type of reaction. I loved that everyone got a lot of scree time in the movie because when you have that many stars in a movie. I think the movie could have been about 30 minutes longer to add to the story.

The one great thing I love about this movie is how the actors in the movie picked on characters that they played in previous movies. It added some great little comedy moments which is needed in a movie like this because of the intensity of the action. If you are a fan of any of these megastars then I would recommend this movie to you because each star has their personality, own traits and in the movie has their own issues. I also loved the addition Yu Nan which gave the team a female presence and attitude that gave them a new dynamic.

Finally, once you see the Van Damme-Stallone fight scene you’ll be thinking that you are watching Frank Dux vs. Rocky Balboa. Atleast that’s what I thought at first. The Expendables 2 was great, if not better then the first one. For those who love these movies, good news is in order because a third one is coming. Some of the names being rumored for the final movie are Steven Seagal, Clint Eastwood, Nicholas Cage, Wesley Snipes, and Harrison Ford. For now enjoy The Expendables 2 because it’s an action packed movie that will have you at the edge of your seat.