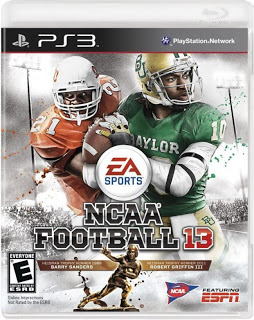 Last week I had the chance to play the newest NCAA College Football game and I have to tell you right off the get go what a game! I saw so many things I liked about this game. For starters the ESPN presentation with it being centered around ESPN’s TV show College Game Day. The commentators are as real as they get and so is the ESPN ticker that is shown below. I also like how they have rivalry games. For example when you go to do MSU vs. U of M it’s automatically listed as the Paul Bunyan Trophy game. The rivalries are as real as they get on this game.

The game play is a lot like Madden 12 in that the game is hard no matter what difficulty you put it on. I can tell you this hits, the crowd noise and home-field advantage is so real it’s ridiculous. It’s so ridiculous that if you’re an opposing team that the crowd can disrupt your plays and game plan. The other thats fun is that you can put past Heisman Trophy winners on your team which makes it a fun blast from the past. There are so many great Heisman Trophy winners but it’s hard to put all of them on there so the select few that were on there are a whose who in football. Some of those include Doug Flutie, Barry Sanders, Desmond Howard, Tim Tebow, and many more.

The coolest thing about this game is you can build your own College. In fact you can do it on the internet and then download it on your PS3 or XBox I thought this was so cool because it seems like it would take a shorter amount of time to create stuff on a computer then it would the actually PS3 or Xbox. Under dynasty mode you can choose what conference your in and the schedule you play throughout the year. I can tell you this much, my friend and I made one of the toughest schedules we could possibly make playing teams like Oklahoma, Alabama, Ohio State, Notre Dame, and Georgia. The dynasty mode has so many great features and it is very in-depth about how your team will do and how other teams are doing as well.

If you are a College Football fan who loves playing video games then this a good game to have. Many people say it’s too much like NCAA 12 but how is that justified when NCAA 12 didn’t have past Heisman winners on the game. I would suggest picking up this game and playing it because if you are really into a certain school you will lose yourself while playing this game and not want to quit.

If I were to rate this game I’d give it 8.5/10. The only thing I didn’t like about this game is that some schools had the players names and others didn’t. I believe all teams should have the names or they shouldn’t. I know that is out of EA Sports control but these Colleges need to let these players be recognized on the game for the abilities and talent. That’s the only thing I dislike about the game. With that being said, go and get this game today and hit the pads on the virtual gridiron. You will really enjoy this game once you start playing.