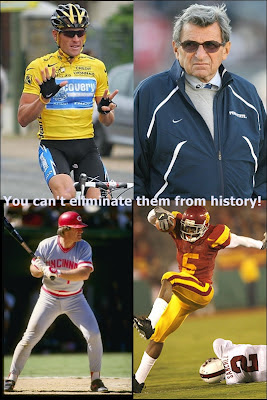 I am the last person on earth you would ever see watch a Tour De France, but I have been hearing quite a bit about Lance Armstrong being stripped of his 7 titles due to “blood doping”. Now it is my understanding that all the other athletes that were second, third, fourth and others behind Lance also have a history of blood doping as well. Therefore disqualifying them from receiving the titles as well. Are they just going to keep moving down the line until they find a clean cyclist? If so, it being proven thats its little harder than it looks.

With that being said Lance was doping and so were all the other competitors, so doesn’t that make it a fair field? If all these other competitors can’t beat Lance while having their blood doped, then why take the titles away, because if everyone was clean they clearly wouldn’t have stood a chance either way. I say let it be a lesson learned for the officials who run the race that they should maybe TEST ALL THE ATHLETES BEFORE THE RACE,  and not years later after the fact. They need to let it go because it’s a hard lesson learned.

The same goes for all these NCAA punishments that keep getting handed down because a player here and a player there excepted gifts and gratuities. That is far more ridiculous then the Armstrong case, but they to go back thru all the record books an rewrite history.  The only difference is that Armstrong’s actions only effect him. The NCAA punishes the team(s) as a whole, because of one player getting greedy. Call me crazy but the last time I checked when a player excepted a little bit of money IT DOESN’T MAKE THE TEAM AS A WHOLE GUILTY! It’s a team game so why take away all those wins,  titles, and scholarships? One players selfishness should make the NCAA go after the player, not the record of the team. All the players on those teams busted their butt to win those championships but now because one guy took some money, or because one sick bastard molested children, the whole team gets punished for something they had no part in. Joe Paterno like him or not should STILL be the winningest coach in NCAA history period. Sandusky being a sick twisted pedophile had nothing to do with Paterno’s mastermind play calling and the way the team played.

The USC Trojans, Buckeyes and all the other college teams that have had their championships and stats wiped clean due to players excepting gifts should have never happened. The institutions should go after the guilty players and coaches solely, and leave all the other team players that have busted their butts to win those championships out of it.

Baseball has it right to some degree because although some players have used PEDs their records and stats still stay intact because they realize that everyone probably is taking advatange of the game. Barry Bonds record is intact as well as A-Rods MVP Award in 2003. The only thing I dont agree with in baseball is not allowing Pete Rose in the Hall of Fame. His betting did not effect the on field activities of the game. How can their even be a Hall of Fame when the all time leader in hits is not even in it. How can you eliminate someone from the history books?

They’re rewriting the history books and it’s stupid. When you reference Tour De France you think Lance Armstrong, but now we wait until they find a clean competitor that finished 23rd in the race and give him the title. Even that guy probably feels a bit guilty for taking the title knowing that he isn’t the better athlete. Its no different for the college teams  who got beat in the championships. THEY STILL GOT BEAT IN THE CHAMPIONSHIPS! Just because a committee says a collegiate athlete took money we need to go back 4 years and take away all the wins. It does not mean that the second best team is now the best. They still lost the game and when people think back to that game they are going to forever think on who won and who lost. It’s not who the authority’s say whom due to some stupid stipulation.

Leave history how it is and move on. Learn from your mistakes and crackdown in the future to prevent this stuff from happening again. Do not go back in time and change history!