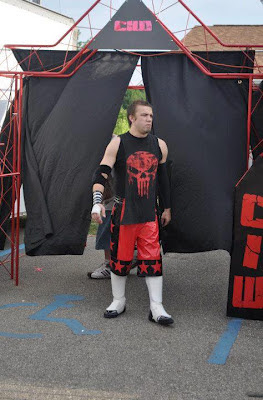 A little over a year ago Chase Matthews was starting his wrestling career full time after overcoming many obstacles and now a year later Chase Matthews is on the move and wrestling all the time in different promotions across Michigan. I caught up with Chase Matthews to see how things are going and he wasn’t shy about how the last year has been going for him.

It’s been a year since Hollywood’s World of Sports chatted with you, what has been the biggest changes in your wrestling career since then?

I feel like my performance in the ring has gotten a ton better.

You recently had a series of 3 matches with CJ Otis. What did you learn from those matches and how did you feel after those matches were over?
I learned that CJ Otis is in fact a beast. I felt like I was ran over by a semi truck multiple times after every one of my matches with him. I also felt that I proved to hang with the “big boys” in POG, or in any other promotion out there.

What has been your favorite match that you’ve competed in during the last year?
I have 2 favorite opponents. My three matches with CJ Otis has bought out the best in me, and I wrestled Jack Thriller, my trainer, in a one on one. 2 dudes that I first saw in POG when I was just a fan. Never knew I would get trained by one of them, let alone get to wrestle them both.

Who on the Michigan Indy Scene would you like to face that you haven’t faced with?
Don’t really have a specific person I would like to face. I will wrestle anyone.

I think CJ and myself would make a pretty bad ass tag team, no lie. He’s the ground and pound dude, and I would be the quick on my feet, not afraid to fly kind of guy.

You have a unique look that resembles The Punisher. What made you go with that look and how does that play into your character?
I have a Punisher skull tattooed on my arm, and I got it for a reason. The story (in the 2004 movie) behind the Punisher always made me think “yeah…I would do the same thing if put in that position” I see every opponent as someone who is getting in my way, and trying to take my dream from me, and I would try and stop them before they stopped me. I wouldn’t call it a gimmick, because if put into a real life situation, my reactions would remain the same.

You’re competing in Price of Glory’s annual tournament, the Glory Cup in October. Who would you like to face the most in that tournament?
Jack Thriller.

In the next five years where do you see your pro wrestling career?

I see myself going as far as I am allowed to go.

Name Association. I am going to give you a name. I want you to describe them in one sentence.
Dan Severn: One of the nicest guys I have ever met
John Camobell: I’m proud of his accomplishments.
Roderick Street: A very underlooked talent that should be getting noticed.
CJ Otis: A machine.
Jack Thriller: Someone who is more than just a trainer. I can call him a friend. I can call him an older brother figure. He takes care of his students as much as he can. An extremely cool guy. Someone I think who should get noticed just for his charisma alone. Not to mention a genius in the ring. Many times have I found myself just zoned out in amazement just watching his catch wrestling. Simply brilliant. (That wasn’t really one sentence, but I summed it up as best as I could haha).
Chase Matthews career is just beginning and it will keep continuing to get better and more intriguing. Chase is a mainstay at Price of Glory so be sure to find out when he’s action at http://www.priceofglorywrestling.com or add him on Facebook at https://www.facebook.com/chase.matthews.712 to see where else he will be wrestling.
Please Share This
This Post Has One Comment