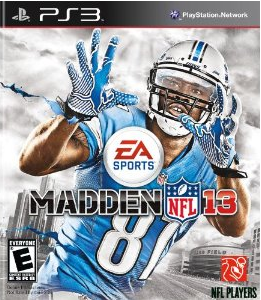 Over the last week I have been playing the new Madden 13. I have a heard and read a lot of reviews on it but wanted to form my own opinion. I think the new Madden has an excellent feel to it in terms of the gameplay. This is probably the most realistic Madden game I have played since they have come out.

The gameplay features more fatigued, more realistic hits and much more realistic results of plays. The graphics and presentation that go along with the gameplay are really awesome. It feels like I was watching NFL on CBS. Jim Nantz and Phil Simms look so realistic and there commentating is enjoyable to listen to. The gameplay, graphics and presentation will capture your attention and really get you into the game. This years Madden took a huge step forward in those departments. If you enjoy a good realistic sports game  that you would enjoy this game revolves around that very team. The other great thing is the real time news, updates and scores if you have internet capabilities. Having the online features in a sports game is always a good thing because you get so many updates that make the game that much more fun to play.

Even though they take a step forward in some departments, they took a step back in the features department. The disposed of the franchise mode and replaced it with connected careers. You can no longer create your own team, players or have a fantasy draft. You also can no longer play with two or more players in career connections. These are all things that made the game a lot of fun and it allowed you to use your imagination. A lot of people are extremely disappointed that these features got taken out but it’s all about trying something new.

In the end once you start playing this game and realize how awesome it is, you will forget about all the things they took out of it. If you’re an NFL who believe in the realism of the game, this is a game for you. My final ranking on this game is 7.5/10. It has great gameplay, graphics and presentation but in an attempt to come up with a new vision for the game they came up a little bit short. NFL fans go and get it today but if you are a fan of the old Maddens I would try it out before you buy it.